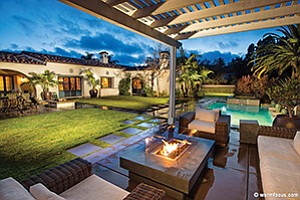 The back view of 1176 Via Zamia, a 4,380-square-foot home in the Sidonia development of Encinitas Ranch. Photo courtesy of Warm Focus Photography

San Diego — A drive along the side streets off Leucadia Boulevard between Interstate 5 and El Camino Real is a simultaneous look at the past of Encinitas and its future.

West of Quail Gardens Drive, the area is a densely populated mix of ramshackle, mid-1950s ranch houses alongside newer, million-dollar estates that replaced the original homes.

Kathy Hewitt, a luxury property specialist with the Rancho Santa Fe office of Berkshire Hathaway HomeServices, has a listing for one such home at 796 Clark Ave. 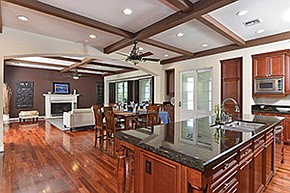 “The builder was a young guy who basically saw an opportunity,” Hewitt said. “All those houses in there are the old ranch houses that were built for the workers who used to work the agriculture up there.”

Hewitt said the house was a “scraper” at the end of a little side driveway off Clark Avenue. Matt Villalobos, the owner/builder, grew up locally and has a love of the area and a passion for architecture.

“He liked the fact that Leucadia (now Encinitas) is known for the agriculture,” said Hewitt, who has been in real estate for 15 years. “The new structure replaces a 1960 farmhouse.” 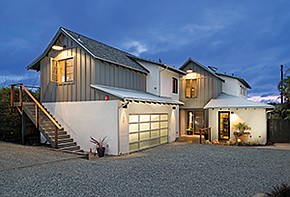 The exterior of 796 Clark Ave. in Encinitas. Photo courtesy of Berkshire Hathaway HomeServices

Hewitt said the idea was to design a modern farmhouse as a nod to the area’s past but with innovative details that acknowledge the direction the area is moving. The architect was Sacramento-based Flex Architecture, the builder was La Costa Builders Inc. and Cardiff Cabinetry & Finish did the custom cabinets. Amanda Osborn of San Marcos-based Havenscapes Landscape Design designed and installed the landscaping.

It’s an innovative use of reclaimed and rare wood such as black limba, teak and mahogany with an open floor plan and polished concrete floors. Old

skateboards were used for the tiling in one of the baths and laundry area — another nod to the character of Encinitas.

The new home is 2,900 square feet with four bedrooms, five baths, pool, outdoor shower and a guest house over a three-car garage. The asking price is $2.375 million.

Encinitas was once known as “the flower capital of the world” because of the world-famous Paul Ecke Poinsettia Ranch. Ecke came to the area in 1924 to grow the plant, now synonymous with Christmas, and soon many other growers flocked to the area to put down roots. Remnants of the flower industry remain today, sprinkled around the hillside.

Ecke originally had 900 acres in Encinitas. In 1994, Ecke developed about 850 acres of farmland into what is now known as Encinitas Ranch. In 2012, the remaining acres were sold to the Leichtag Foundation.

Encinitas Ranch is also home to the Encinitas Ranch Golf Course off Quail Gardens Drive, which opened in 1998. Sprawled across both sides of Leucadia Boulevard, the public course has sweeping views of the Pacific to the west and the backcountry to the east. Not surprisingly, developers swooped in to develop the land around the course. Now various housing developments dominate the ridge and the surrounding area.

“People just tend to fall in love with the street,” Weir said. “It’s really rare to have that much space in the heart of Encinitas.”

His listing at 1218 Via Zamia was built in 2005 and is 5,491 square feet with six bedrooms, seven baths and hugs the fairway of the Encinitas Ranch Golf Course. It is priced at $2.345 million.

“It has half an acre of useable space, surrounded on three sides by the golf course or open space,” Weir said. “You really feel like you’re unto yourself over there with intense privacy and without so many people around you, it’s a really rare, really cool thing.”

His other listing, built in 2004, is closer to the entrance of Sidonia at 1176 Zamia and is 4,380 square feet with four bedrooms and five baths priced at $2.2 million.

Weir said it has a beautiful pool and entertaining area in the backyard and that the lots on both houses are square, which provides “plenty of space for kids to run around and entertain.”

Weir said the great rooms are really lovely in both houses, with high ceilings, open floor plans, high-end appliances and finishes throughout. Each has a casita with a separate entrance for people who are looking for an in-law suite.

“They are different houses, but a lot of the things that stand out about each one, both of the houses have,” Weir said. “Like the open floor plan — the breakfast nook carries on from the great room that carries onto the kitchen; it’s really nice and people are really drawn to that.”

Weir, who also has a broad background in economics, marketing and web design, said the best part about the location is being so close to the two major shopping centers along El Camino Real on the east side, the beach a short distance to the west and easy access to the charming, increasingly upscale downtown Encinitas.