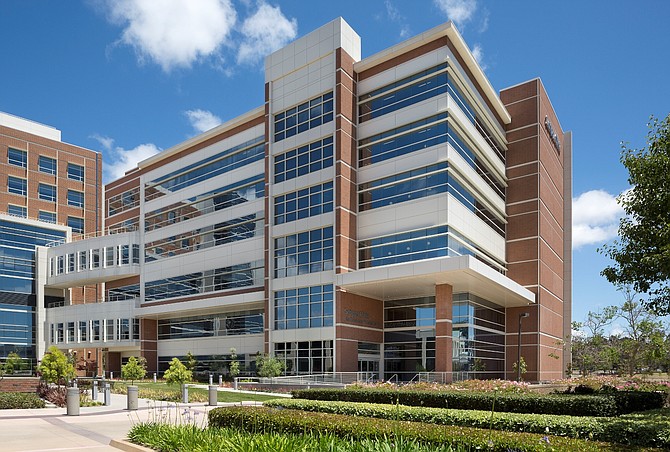 Scripps Health has opened the doors to its latest multimillion-dollar facility – the John R. Anderson V Medical Pavilion – in a move to unite resources previously unconnected at the hospital system.

The $130 million outpatient project is part of a 25-year “master plan” to completely transform Scripps Memorial Hospital in La Jolla. The seven-level, 175,000-square-foot building sits adjacent to the hospital system’s new $456 million Prebys Cardiovascular Institute, which opened last year. The two facilities are connected by a pair of sky bridges that allow for quick movement between the buildings.

The new pavilion includes four outpatient cardiac catheterization labs (cath labs) where patients can undergo heart procedures like receiving stents or pacemaker implants. The center is one of only two outpatient facilities in California operating cath labs (as these procedures are traditionally performed in a hospital setting). That’s because Scripps joined forces with Cedar Sinai Medical Center in Los Angeles to pass legislation in 2012 that approved the rule change as long as immediate access to a full inpatient operating room is maintained. The pair of sky bridges that connect the pavilion with Prebys meet that requirement.

Offering services on an outpatient basis can be less expensive for patients because facility construction, permitting and licensing costs are cheaper for medical office buildings than they are for hospitals. However, a Scripps official said that a comparison of catheterization costs at Prebys and the new pavilion were not available.

The new facility caters to more than cardiac patients, with 17 medical and surgical specialties including neurology, diabetes, dermatology and family medicine.

Medical services in the building are being provided by Scripps Clinic Medical Group with more than 50 doctors on board (many of which are coming from Scripps Green Hospital, according to a Scripps spokesperson).

The new facility, along with the Prebys building, are meant to connect previously disparate services and resources that were historically scattered across multiple campuses.

“The medical pavilion brings together exceptional physicians, staff and technology in a one-stop-shop for comprehensive outpatient medical services,” said Scripps Health President and CEO Chris Van Gorder in a statement.

The project was built with the help of a $25 million donation from philanthropists Eileen and John R. Anderson IV. The clinic is named for their son.

“We are extremely grateful to the Anderson family for their continuing generosity and support of our efforts to deliver the best care possible to our patients,” Van Gorder said.