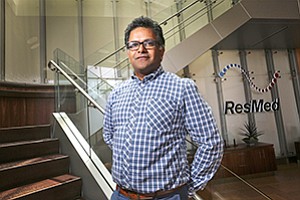 Raj Sodhi came to ResMed in 2012 through an acquisition and has been instrumental in transforming the company’s informatics and software.

San Diego — ResMed Inc. is shoring up its position in the “internet of medical things,” funneling massive resources into its digital health portfolio and watching its stock climb as a result.

The company, which employs 400 people locally, is a bit of a darling in San Diego’s medical device sector; celebrated for sticking around in an economy where many growing life science firms choose to sell out. The company was founded in 1989 with only eight employees and now employs over 5,000 people worldwide. It’s valued at $9.2 billion, making ResMed one of the largest public companies in San Diego.

Perhaps most telling, however, is the company’s stock performance. In a down market, when nearly all San Diego biotechs and device makers are suffering losses in valuation, ResMed’s stock has climbed 23 percent since January to over $65 per share recently. Over the past five years, the stock has risen 118 percent in total.

Although the company has been around for decades, ResMed is keeping things nimble at its Kearny Mesa headquarters — possibly the key to its success.

In a nod to the company’s changing priorities, the firm’s fourth floor was recently wiped clean and remodeled to accommodate ResMed’s growing software development team. The new floor resembles a trendy tech startup, complete with Ping-Pong tables, an open concept layout, and fancy espresso machines that would charm even the snobbiest coffee addict. That’s in stark contrast to the rest of the building, by the way, which is the perfect picture of corporate life: cubicles, walls, and, yes, offices with doors.

“We wanted to create a space that was fun and attractive to top tech talent,” said Raj Sodhi, president of ResMed’s informatics division.

And tech talent is what they’re attracting. In droves.

The company’s tech department, called the health care informatics division, was made up of only a handful of employees just a few years ago. Today, the entire fourth floor of the building is dedicated to the informatics team. Although ResMed would not disclose the exact number of tech employees, it looks like close to 200 people work in this department (when counting clusters of desks throughout the space). And Sodhi said the tech team is already bursting at the seams. The company intends to redevelop another wing of the facility to accommodate more developers in the near future.

Why the boom in the informatics department? That has a lot to do with Sodhi.

Sodhi came to ResMed from a company called Umbian, which made health monitoring software in Canada called U-Sleep. The firm was acquired by ResMed in 2012 for $41 million, and Sodhi came with it. Today, he heads up the informatics team and has been instrumental in building ResMed’s digital health portfolio with multiple acquisitions since.

“We’ve always been a medical device company, but if we’re looking at having a sustainable competitive advantage and changing the basis of competition, then health care informatics is the opportunity,” Sodhi said.

ResMed primarily develops machines to treat sleep apnea, a dangerous condition in which breathing is interrupted — and sometimes stops altogether — during sleep. Patients with this disorder experience poor quality of sleep, which (at best) makes individuals tired during the day and (at worst) can result in serious neurological disorders caused by sleep deprivation.

Sleep apnea patients are no small group. More than 18 million American adults have sleep apnea, according to the National Sleep Foundation, and many go undiagnosed as doctors cannot detect the condition during routine office visits.

ResMed’s continuous positive airway pressure (CPAP) machines are used to prevent the patient’s airway from collapsing during sleep. The company has been making these machines for decades, but in 2014 ResMed released the AirSense 10 series which came loaded with cellular chips embedded inside.

The device collects data and broadcasts it to parties who need it (doctors, home medical equipment providers, for example). With all this data being collected, tools were needed to make it useful. Enter, software.

The AB ZZZ’s of Monitoring

“We’re building an ecosystem that allows us to drive better outcomes for the patient, and drive efficiency for our providers,” Sodhi said.

And ResMed’s sales numbers make this quite clear. Since ResMed’s chip-enabled AirSense 10 devices came on the market, sales have boomed.

Health care informatics is one of three areas of focus for ResMed’s 2020 strategy, said CEO Mick Farrell in a Q2 earnings call. “(It’s) truly a core competence for ResMed, and a source of sustainable competitive advantage,” Farrell said.

ResMed’s Air Solutions suite is just the beginning of the company’s foray into health care informatics. The firm recently acquired Georgia-based Brightree, a business management and clinical software company that makes applications for the home medical equipment industry. The price tag for Brightree was $800 million, making the software firm the biggest acquisition in ResMed’s 27-year history.

“And we’re just lacing our shoes at this race,” Sodhi said.