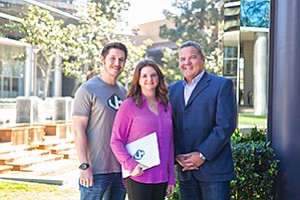 The La Jolla-based lender offers point-of-sale financing through deals with merchants across the western U.S. and is set to roll out its platform nationwide in a few weeks. Its monthly loan volume is more than $2 million.

The round, led by Alsop Louie Partners and Mucker Capital, adds to the $1.7 million LoanHero raised as of June. LoanHero also has a $20 million credit facility to make its loans.

Alternative lenders, including Lending Club and Prosper Marketplace, have increased consumers’ access to credit, though they typically require higher interest rates than a traditional bank loan. But amid banks’ pullback from some types of lending post-recession, the market has surged in popularity, growing from $1 billion to $12 billion between 2010 and 2014.

The increased competition has led to a fight for borrowers as lenders strive to show aggressive growth statistics. LoanHero, founded in 2014, is hoping its partnerships with brick-and-mortar retailers provide a steady stream of borrowers without having to outspend more entrenched players on marketing or customer acquisition.

“Platforms are looking for more borrowers and they’re driving up the cost of search engine optimization,” CEO Steve Connolly said. “We can go relatively inexpensively to a merchant, create a conduit for borrower applications and our cost of acquisition is much, much lower.”

President Derek Barclay and chief operating officer Kristin Slink founded the company in 2014 after working as consultants, helping retailers improve the way they handled in-store financing options, such as Synchrony credit cards. A merchant may have used up to five platforms, each with different credit criteria, and risked running customers down a waterfall of lenders as they got bounced from one application to another. Customers sometimes ended up in subprime products, even though they may have qualified for a midprime product.

“That’s so embarrassing,” Slink said. “So we decided to put everything into one technology.”

LoanHero’s software triages applicants, matching them into one of three groups. The best-qualified customers are paired up with credit unions or banks that participate in the platform. LoanHero lends out to the middle group itself, keeping some of the loans on its books and selling off the rest on the secondary market. And higher risk borrowers are offered products from Crest Financial and others.

LoanHero also has connections to some of San Diego’s more established alternative lenders. Zalman Vitenson, former CEO of Capital Partners, is LoanHero’s executive chairman, a title he also holds at Dealstruck. That company was co-founded by Ethan Senturia, whose father Neil Senturia leads Blackbird Ventures and is a member of the board of directors at LoanHero. Connolly said Michael Thiemann, the former CEO of Global Analytics and head of recently launched Zebit, was an adviser.

“The connection is real,” Connolly said. “It’s a close-knit ecosystem.”

Merchants pay LoanHero a percentage of each sale funded through the platform, between 1 percent and 20 percent, which is the company’s largest source of revenue. National and regional retailers in California, Oregon, Washington, Arizona and Nevada currently use LoanHero in about 100 locations. Loans run between $1,000 and $25,000, with interest rates from 15 percent to 35 percent. The average term is three years. Car repair shops, furniture stores, home improvement retailers, alternative health providers and pet stores have shown the most interest so far.

LoanHero isn’t the only lender zeroing in on point-of-sale financing. Prosper’s health care lending arm has a network of tablets in doctors’ offices, allowing patients to apply for loans covering elective procedures. And at an industry conference in April, Lending Club unveiled a point-of-sale terminal prototype with a touchscreen and scanner that it dubbed the Lending Club Cube.

“All of these lenders are looking to differentiate themselves and feed their top-of-funnel client acquisition,” said Dinkar Jetley, co-founder of Pivot Investment Partners and the former head of worldwide securities for JPMorgan Chase.

Point-of-sale lending is a little less crowded than the rest of the industry, he said, though the true test will come once lenders’ underwriting systems are put through a full credit cycle.

“But right now, the struggle is to prime that growth pump in new ways, and cost effectively,” Jetley said.