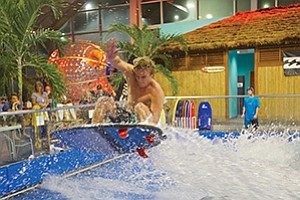 San Diego — Where can a person surf in 85-degree water and vote in the first-in-the-nation presidential primary? It really is New Hampshire.

People in the Granite State (and nearby Boston) do the former with the help of a Solana Beach business which continues its national and international outreach.

Half a world away, a SurfStream machine is going in at the Hainan Qizbay Grand New Century Resort in China. Hainan is an island province and China’s southernmost point. Some compare it to Hawaii.

McFarland said a license agreement with Polin Waterparks of Turkey, signed in November, provides a new sales channel to the waterpark market and will help American Wave Machines penetrate new areas. Polin makes waterslides; it claims to be in 2,500 waterparks in 93 countries. One of Polin’s specialties is high-end fiberglass manufacturing — including fiberglass for the McFarlands’ creations.

The business offers two products. The SurfStream is a relatively compact machine, producing a standing wave. A PerfectSwell surf pool sends waves across a much larger body of water at regular intervals. Both machines allow users to specify the size and shape of the wave they want. (That is, within reason. Sixty-foot-tall waves like those recently spotted in Northern California are not available.) People can ride the waves using regular surfboards.

Machines are assembled at the venues, using industrial components (such as water pumps) manufactured inside and outside California. McFarland said he has had a couple of recent, interesting sales.

An on-again, off-again megamall development outside New York City is scheduled to get one of the larger PerfectSwell systems. Developers recently added two SurfStream machines to the master plan of the American Dream mall in New Jersey’s Meadowlands. “We’re pouring concrete,” McFarland said.

Taiwan-based Sheico Group, which manufactures wetsuits for major surf brands, is putting a wave machine in a factory as an amenity for employees and visiting clients, McFarland said.

The Skyplex complex in Orlando, Fla., is scheduled to get the largest SurfStream in the world, with a 48-foot-wide standing wave, McFarland said. “They have approval. We’re under contract,” the CEO said. The Orlando Business Journal said the attraction will open as soon as 2018.