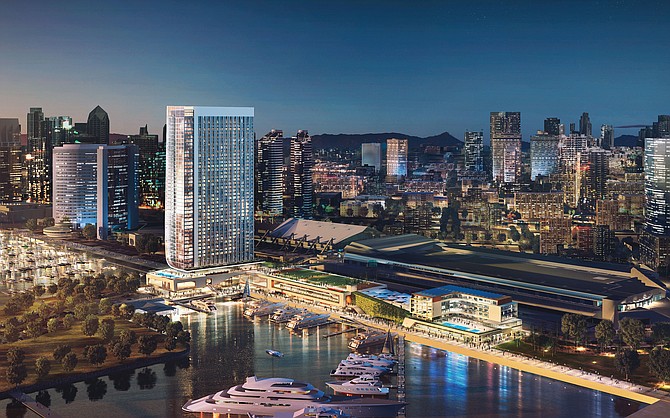 A statement from Encinitas-based Robert Green Co. said developers have submitted a proposal to the Unified Port of San Diego, for a project that also includes a 565-bed shared lodging hotel. Called 5th Avenue Landing and located behind the convention center, it would also have an expanded marina, new public open space and waterfront viewing areas.

Developers said the project has been designed by architecture firm Gensler to enhance public accessibility to the bay from downtown, with improvements to include a new bridge linking the convention center’s public viewing platforms to nearby new plazas. The project will require approval by the port district and California Coastal Commission.

Fifth Avenue Landing LLC, led by Arthur Engel and Raymond Carpenter, has held the ground lease on the six-acre property for more than three decades. It is located at the corner of Convention Way and Marina Park Way, next-door and to the southeast of the existing Marriott Marquis San Diego Marina hotel.

Robert Green Co. and its partners have previously developed other U.S. hotels and resorts, including Four Seasons properties in Silicon Valley and Jackson Hole, Wyoming.

In May 2015, convention center operators backed out of plans to acquire the same land parcel, following a 2014 court decision that struck down a hotelier-approved funding mechanism intended to finance the bulk of a proposed $520 million center expansion.

The San Diego Convention Center Corp. in 2010 entered into a $13.5 million lease purchase deal with Fifth Avenue Landing LLC to acquire the 7-acre waterfront site. The deal called for center operators to pay $1 million at the close of escrow, followed by $500,000 in annual payments over the next four years, then a balloon payment of $10.5 million in the fifth year.

The Convention Center Corp. decided to default on that final payment, essentially voiding the deal and leaving the convention center with no refund of its $3 million in prior payments. Several government officials and other observers had deemed that parcel crucial to any future plans to complete a contiguous expansion of the center.