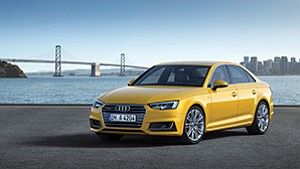 Photo courtesy of Audi AG Qualcomm Inc. announced that its Snapdragon microchips will go in 2017 Audi automobiles. Shown is a 2016 model.

San Diego — When you hear about cloud computing coming to your automobile, thank Qualcomm Inc.

Company CEO Steve Mollenkopf offered that message to listeners at the big Las Vegas consumer electronics show during the first week of January.

In a barrage of announcements from CES 2016, Qualcomm (Nasdaq: QCOM) offered updates on how it’s putting its chips into motor vehicles — among other topics. The range of announcements was wider than Interstate 5 at the Sorrento Valley merge.

For example, Qualcomm elaborated on how its Qualcomm Life unit will partner with pharmaceutical giant Novartis on a way to deliver medicine for pulmonary disease.

Kip Clifton, who covered Qualcomm as an analyst for Deutsche Bank before forming his own startup, said he was most interested in announcements related to new forms of Wi-Fi connectivity. One Wi-Fi technology from Qualcomm’s Atheros subsidiary might let a traveler download a movie very quickly in an airport. Another announcement related to self-configuring, self-healing Wi-Fi networks.

The other announcements did not interest him much, Clifton said.

Patrick Moorhead, founder of Moor Insights & Strategy, said he noticed Qualcomm was filling many of the gaps in its Internet of Things product line.

“Previously, Qualcomm leveraged more of their mobile tech into IoT, but at CES, they introduced optimized products for home automation, lowest power wearables and even LTE for IoT,” Moorhead said, referring to the latest version of cellphone data service. “I believe this makes them more competitive in growth markets.”

The announcements offer the latest clues on where Qualcomm plans to go with its business. With the cellphone business slowing down, Qualcomm is laying off staff, shrinking its real estate footprint and looking for the next big use for its microchips. Consumer electronics are one option, but the corporation is not limiting itself to consumers. Qualcomm is also at work on a business-to-business play with chips for Internet data centers.

Mollenkopf has a particular interest in cars, Clifton said. But it’s a tough area. “Everybody wants to be there,” he said. Competition is heavy and it takes a long time to get a product into a major automaker’s platform. (The former tech analyst now runs Fireside Provisions, a food and beverage business).

One of Qualcomm’s announcements at CES 2016 was that its Snapdragon 602A processor will power connectivity and the “infotainment” system in Audi AG’s 2017 model automobiles. The financial aspect of the relationship was not disclosed. Qualcomm announced its 602A chipset two years ago, at CES 2014.

With the announcement, it appears that Qualcomm has taken some Audi business away from Silicon Valley’s Nvidia Corp., which has chips in 2016 model Audis.

For its part, Nvidia (Nasdaq: NVDA) seems ready for competition. The Silicon Valley company unveiled what it called an “automotive supercomputing platform” at the show, adding that Volvo has selected the chip for its autos. Its product is called DRIVE PX 2.

Qualcomm unveiled plans for its Snapdragon 820A processor, in premium and standard versions, which company marketers hailed as a breakthrough product. The chip combines 4G LTE wireless communication with machine intelligence and advanced graphics capabilities. A premium version has a faster LTE modem. Among other features, Qualcomm said the chip will have the ability to stream high-definition movies into the car. Samples of the 820A family should be available before the quarter is over, the company said.

In a presentation streamed from Las Vegas via the Internet, Mollenkopf said that the auto industry was absorbing fourth-generation wireless technology — that is, 4G — much faster than it absorbed third-generation technology.

Inhalers and the Internet

In the medical sphere, Qualcomm said it was designing low-power, disposable electronics for Novartis’ next-generation Breezhaler inhaler. Financial terms were not disclosed. The inhaler will contain Novartis drugs that treat chronic obstructive pulmonary disease, better known as COPD. The device will connect wirelessly to Qualcomm Life’s 2net medical data platform, tracking inhaler usage as well as the duration of the inhalation (which is a measure of the inhalation’s quality). Novartis plans to launch the device in 2019, after regulatory approvals.

Qualcomm also announced a line of inexpensive, low-power chipsets designed for the Internet of Things. One of the chips in the X5 LTE modem line could have a 10-year service life while running on two AA batteries, the company said. Possible applications include smart metering, security, asset tracking, wearables, point-of-sale and industrial automation.

Also making announcements at CES 2016 was Kyocera Communications Inc., the Japanese company with U.S. offices in San Diego. Kyocera announced several ruggedized wireless phones, including a flip phone as well as a large-screen smartphone, both available through AT&T Inc. (NYSE: T). A waterproof Android smartphone will be available through AT&T’s Cricket subsidiary.

Meanwhile, Carlsbad-based MaxLinear Inc. (NYSE: MXL) announced a microchip that delivers more than 1 gigabit of data per second to the home network, using the MoCA 2.0 standard. MoCA is short for Multimedia over Coax Alliance. The Carlsbad company made several other technical announcements.