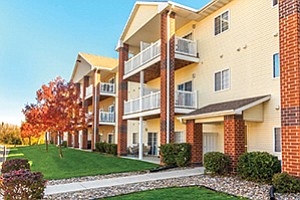 “Student housing has become recognized as a very viable investment sector within multifamily, just as senior housing was recognized that way a long time ago,” said Frederick W. Pierce, president and CEO of the 20-year-old company.

The company now employs about 200 at the 15 university-adjacent apartment properties that it owns nationwide, a portfolio valued at nearly $400 million — much of it acquired in just the past three years — with a total of more than 9,500 student beds.

Pierce Education Properties ranked 14th on the recently released annual list of the nation’s top 25 owners of student housing for 2015, published by the industry magazine Student Housing Business. The Mission Valley-headquartered company moved up seven spots from its 2014 ranking.

Pierce said his company made more than $220 million in acquisitions during the last two years, ending 2015 by purchasing a 490-bed property near Iowa State University for $21.3 million; and a 756-bed property near Western Kentucky University, for a price that was not disclosed due to confidentiality agreements.

With help from a rising tide of large institutional investors putting money into student housing — a category that includes pension funds, endowments and the investment arms of major insurance companies – Pierce said his company is poised to finance more than $600 million in additional acquisitions over the next three years.

Just three years ago, Pierce said, the student housing sector was getting sporadic interest from private outside investment firms looking primarily to make profits on a relatively quick turnover of properties. In the newest heightened wave of investment, the institutional players have more of a buy-and-hold strategy, and are more interested in garnering steady income from student housing, which they deem a safe investment.

Pierce said the institutional investors’ standards fit well with his own. His company’s acquisition focus is on campus-adjacent apartment properties serving primarily public universities with growing enrollments currently at 15,000 or higher. Those universities must also play Division I football.

Pierce said he has found over the years that those criteria also generally attract students who are able to afford to stay in those off-campus apartments, either via their own resources or help from their families. That in part helps to reduce risks associated with vacancies and tenant turnover, as the company offers student apartments — primarily shared three- and four-bedroom units — with resort-style amenities to compete with nonstudent complexes in their respective markets.

About half of Pierce Education’s portfolio is focused in the Midwest, and all of its properties are off-campus. In cases where the company’s properties are not within walking distance of the school, Pierce said his company has frequently set up shuttle services for its tenants.

A former California State University trustee and alumnus of San Diego State University, Pierce also spearheaded committees that planned much of the residential and related development that sprouted on and near that campus during the past two decades.

However, none of his company’s portfolio properties is currently located in San Diego County. While that may change in the future, Pierce said his company primarily finds its best-suited acquisitions in non-western U.S. markets where there are more properties available to purchase and fewer barriers to entry, including land and related purchase and development costs.

“Everyone wants to serve a university, which is like an anchor tenant,” Pierce said. “But near many universities, the land and buildings are either not available or very expensive.”

Pierce Education competes with a growing field of nationwide rivals, led by Austin-based American Campus Communities, the largest student housing owner with more than 95,000 beds, along with Memphis-headquartered EDR and Chicago-based The Scion Group.

Some of those competitors have stakes in the local market. Most recently, an affiliate of San Francisco’s Fowler Property Acquisitions (aka FPA Multifamily, the nation’s 21st-largest owner of student housing) purchased a 263-unit community near San Diego State University for $69.5 million.

The two sellers included Houston-based The Dinerstein Cos., which has developed other apartment properties in the city’s College Area. Zack Holderman, a director with Holliday Fenoglio Fowler LP (HFF) who handled financing on the recent San Diego deal, said the property is only about five years old, but it is not unusual for owners to sell off certain assets to capitalize on rising values in sectors including student housing.

Holderman said while financing rates remain historically low, student apartment purchases and developments generally are slightly more expensive to finance than nonstudent apartments, due in part to turnover-related issues. On the plus side, tenants in student apartments often have family support and roommate arrangements that help ensure that rents are paid.

New local construction is expected to be limited for the foreseeable future, possibly meaning rising rents and property values, though some developers could be moving over the next decade to renovate or replace older buildings that were originally built in the 1960s and 1970s, Combs said.