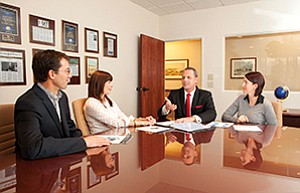 The potential settlement, and the more than $1 billion in penalties the U.S. Department of Justice (DOJ) has imposed on 75 other Swiss banks in the past two years, are aimed at curbing tax avoidance associated with undeclared U.S.-related accounts.

But though the DOJ is trying to tamp down criminal misconduct, Reilly said foreign financial companies are now shying away from taking American accounts. And some American companies have put restrictions on what expatriates can do with their money. Fidelity Investments, for example, said last August that U.S. clients living abroad couldn’t buy or trade mutual funds in their brokerage account.

“To be an American overseas, it’s exceedingly difficult to open up an investment account if you’re telling the truth,” he said. “For a lot of them, their only option may be to liquidate and put it into their bank account, and now they’re not investing at all. How are they going to accomplish their goals if it’s sitting in a checking account earning 0.005 percent?”

RFA was founded in 1999, but its roots stretch back 20 years before that when Reilly’s father, Don Reilly, was a real estate broker, putting together $15,000 limited partnerships. Friends who lived down the street had taken a job as teachers working for Aramco, the Saudi Arabian national oil company, and were back in San Diego for a vacation. They were looking for something to do with their rising income and bought into one of Don Reilly’s partnerships.

Reilly said Americans working for Aramco formed the backbone of his father’s initial client base. Aramco employed everyone from firefighters to geologists and workers ended up with a lot of money to save. They lived on a compound with heavily subsidized housing, had very low taxes, and few outlets to spend their money in Saudi Arabia. A typical client might have $2 million in their 401k and defined benefit plans by the time they retired. The oil boom in the 1980s made Aramco workers prime targets for dubious offerings, according to Reilly.

“Every single bad deal that was ever put together was sold to the Americans in Saudi Arabia,” Reilly said. “There was a dinner theater, a strawberry creamery, bull breeding, a Thai currency scheme. It was really tough to distinguish yourself as safe, solid, secure when people were coming up with these pie-in-the-sky ideas.”

By the time Don Reilly founded RFA, all of the firm’s clients were either in Saudi Arabia or had worked there. RFA has since diversified its client base in the U.S., with expatriates now making up roughly 25 percent of the business. RFA has $800 million in assets under management and roughly 800 clients. But while RFA now has clients in more than a dozen countries, almost all the expatriates still have Saudi Arabian ties.

“We realized that was a little too risky,” Reilly said. “I’d love to see the expats go back up to 50 percent, not just from Saudi Arabia, but from all the other parts of the world.”

That’s why RFA is launching a European office in Prague this September, its second office abroad after opening a one-man shop in Dhahran, Saudi Arabia, three years ago. The Czech location will be run by Reilly’s daughter and his son-in-law. Aramco expatriates are unique because they typically work there for decades, while most other expatriates might spend a few years in one country before getting posted somewhere else.

Reilly said that will make it difficult to build a steady client base quickly. But if RFA can pull it off, those initial European clients may disperse to Asia or Latin America, opening the possibility to expand operations globally.

“Is it possible to capture that person who’s in Europe for three years and once they’re gone keep working with them?” Reilly said. “I wouldn’t be surprised if it’s six, nine months before we have our first account. But we’re willing to try.”