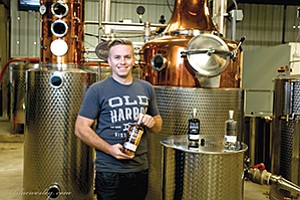 Photos courtesy of Old Harbor Distilling, Michael Wesley Michael Skubic is founder, owner and distiller at Old Harbor Distilling, in downtown San Diego’s East Village. The company is among a handful of locally based craft spirits distillers who could benefit from the newly enacted California Craft Distillers Act of 2015 that took effect on Jan. 1.

San Diego — With a little help from a crowdfunding campaign — and much more from California’s newly enacted Craft Distillers Act of 2015 — Michael Skubic is anticipating a turbo-charging of business for his small San Diego distilling company and upcoming cocktail bar in 2016.

The new law, which took effect Jan. 1, removes Prohibition-era restrictions that prohibited spirits distillers from selling their bottled products on premises, directly to the public. It also allows the on-premises serving of mixed drinks and hosting of private events, long banned at the state’s distilleries.

Now the local region’s small contingent of pure-play craft distillers, along with beer brewers who also make spirits, will have sales opportunities that were long ago made available to operators of wineries and breweries statewide.

“It’s a real game changer,” said Skubic, founder and owner of Old Harbor Distilling, which he started in 2013 in an East Village building that once manufactured buoys. “I’m excited because not only will I be able to sell more, but I’ll also get to be a lot more artsy with the things I make here.”

Skubic, 29, co-founded Miramar’s Hess Brewing Co. with Mike Hess, but left in 2012 to focus on his own passion for craft spirits. He is now the head distiller and only full-time employee at Old Harbor Distilling, crafting his own Southwestern-style gin and a potent rum harkening back to the strong drinks favored by members of the British Royal Navy as early as the 1700s.

Skubic’s biggest change already in the works is a new bar being set up at his company’s 7,500-square-foot distilling and tasting room facilities at 17th and K streets. He hopes to fund the bulk of the renovation project’s costs — to range between $70,000 and $100,000 — with a crowdfunding campaign on the website Indiegogo that was launched in mid-November, not long after the new distiller rules became law.

He anticipates that the combination of the new regulations and selling opportunities available in the bar — to be operating by late January — will increase his 2015 sales of around $100,000 by a factor of five in 2016.

His profit margin should go from around 40 percent to around 90 percent, thanks largely to the change that allows distillers to sell directly to their customers, and cut out extensive middle-man costs associated with wholesale and retail distribution. Like many states, California for nearly a century has permitted hard spirits to be sold only through licensed distributors and retailers, and not on-premises by their manufacturers.

Those Prohibition-era restrictions have long since been relaxed for makers of craft beer and wine, but not for makers of harder spirits.

In addition to allowing on-premises sales — the equivalent of three 750 ml bottles per customer, per day, or a total of 2.2 liters — the new rules let craft distillers own bars and restaurants under specific circumstances. One of those venues must be on the premises of the distiller, and the others must also offer the products of competing makers in addition to the distiller operating the restaurant.

The new law currently has impact on just a small number of craft distillers based in San Diego County, selling a range of flavored gins, rums, vodkas and whiskeys among other spirits, but that contingent could grow with the lifting of restrictions. In addition to Old Harbor, the pure-play distillers include San Diego’s Kill Devil Spirit Co. and Malahat Spirits Co., Spring Valley’s Liberty Call Distilling Co. and San Marcos’ California Spirits Co.

Yuseff Cherney, Ballast Point’s chief operating officer, head brewer and co-founding distiller, said by email that his company is still digesting the ramifications of the new California law, and will hold off on discussing any new operational efforts geared to spirits.

California currently has at least 75 craft spirits makers, a significant rise from the five to 10 that operated in the state as of 2000, according to the California Artisanal Distillers Guild, which is based in El Dorado Hills, near Sacramento.

“By giving craft distillers the same privileges as wineries and breweries, thousands of jobs will be created and California brands will be able to compete in the international marketplace,” said Cris Steller, executive director of the artisanal distillers group, in a statement.

“This historic legislation changes Prohibition era laws for craft distillers to reflect the modern marketplace,” said Assembly member Marc B. Levine, D- San Rafael, the sponsor of Assembly Bill 1295, which was passed by the California Legislature and signed into law in October by Gov. Jerry Brown. It is now known formally as the Craft Distillers Act of 2015.

With help from the new law, Skubic said he’s hoping to branch long-term into more spirits, such as aged whiskeys, which are tough for many craft distillers to produce because of storage capacity requirements and high carrying costs associated with the aging process.

If the experience of craft beer-makers is an indication, Skubic said selling products on-premises, on a larger scale, should help build loyalty around specific recipes. That in turn will encourage more internal experimentation and sales of products to customers in other regions as those locally made offerings gain a reputation via stronger sales at the distillery’s bar and tasting room.