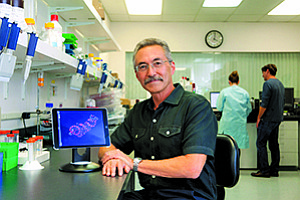 Local drugmaker Imprimis Pharmaceuticals is offering cheap versions of expensive Retrophin drugs to patients who need them. The latest is a low-cost alternative to Thiola, a kidney stone drug that went from $1.50 a pill to $30 a pill in 2014 after it was acquired by Retrophin (which at the time was run by pharma’s favorite whipping boy, Martin Shkreli).

Soon after the price hike, Retrophin cut all ties to Shkreli, but kept Thiola’s price at $30 a pill. The drug is used to treat cystinuria, a chronic disease that causes stones to form in the kidney, ureter, and bladder. Since cystinuria is a chronic condition, the typical starting dose of Thiola is about eight pills a day. At Retrophin’s price, it would cost patients more than $87,000 per year.

Imprimis said its compounded alternative to Thiola may reduce the cost of the drug by more than 70 percent.

It’s the second time Imprimis has vowed to counter one of Shkreli’s price-gouging moves. The San Diego compounding pharmacy gained attention last year for offering a low-cost version of Daraprim after Shkreli notoriously raised the anti-parasite drug’s price from $13.50 to $750 a tablet.

Mark Baum, CEO of Imprimis, said he sees opportunity to build a market in countering major hikes in drug prices, citing that 12 percent of branded drugs do not face generic competition, according to the U.S. Food and Drug Administration (FDA).

“This competition vacuum creates artificial legal monopolies for some companies, which has led to the massive price hikes we have seen over the past few years,” Baum said. “We are responding to the needs of real people with real and immediate problems by offering therapeutically relevant, low-cost solutions.”

Unlike Thiola, the Imprimis formulation is not FDA-approved, and can only be used when prescribed by a doctor for a particular patient. Compounded therapies are not subjected to the same level of regulatory evaluation because they are made by combining FDA-approved ingredients (which have already been through safety and efficacy studies). Therefore, compounding pharmaceutical companies do not have to prove the efficacy of their combinations.

Imprimis’ generic version of Thiola will be available to patients in April.

In other life science news, Cidara Therapeutics snagged another useful designation from the FDA that will lighten the drugmaker’s load during and after clinical trials.

The company received orphan drug designation for its anti-fungal drug candidate CD101 IV, which already earned fast-track approval from the FDA last year. With those two designations combined, Cidara is eligible for 12 years of market exclusivity in the U.S. once the drug meets FDA approval. The orphan drug designation provides Cidara with other perks, including an exemption from performing clinical studies in pediatric patients, and tax credits for the cost of the clinical research.

The FDA awarded Cidara these designations based on an urgent public need for drugs like CD101 IV. The drug is designed to treat a particularly dangerous fungal infection that affects hospitalized patients.

While super strains of bacteria (i.e. “superbugs” that have grown resistant to antibiotics) usually receive all the media attention, fungi can be equally deadly, especially when it enters the bloodstream.

“The consequence of getting a fungal infection can be far more dire than getting a typical bacterial or viral infection,” said Jeffrey Stein, president and CEO of Cidara.

This is particularly true in patients with weakened immune systems, such as those undergoing an organ or bone marrow transplant, chemotherapy or a patient with AIDS.

Cidara’s CD101 IV is meant to treat Candida fungal infections that have already reached the bloodstream. These infections include candidemia, which is associated with extremely high mortality rates.

The company plans to initiate a Phase 2 candidemia trial in the first half of 2016.