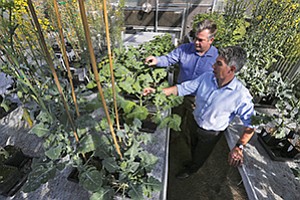 San Diego-based Cibus is developing a process to edit plant genes as opposed to introducing new genes, which is the traditional gene-modification model. VP of Research Greg Gocal (left) and CEO Peter Beetham are shown here checking out the canola plants at one of their local greenhouses.

San Diego — As high-profile companies such as Whole Foods and Chipotle turn up their noses to genetically modified (GM) foods, farmers are increasingly in search of crops that won’t turn off the consumer.

The farmers’ problem lies in growing consumer-friendly, non-GM crops that are as productive as genetically modified ones. GM seeds are designed to grow plants that can withstand heavy doses of herbicides and pesticides, while also being resistant to disease. Non-GM crops, by comparison, can’t be as competitive because they’re more likely to get sick, die early, and produce less at harvest time.

As those in the agriculture industry search for ways to appease consumers while keeping up with global demand, companies such as San Diego-based Cibus might have the answer.

Cibus (pronounced see-bus) is fine-tuning a gene-editing technology that improves a crop’s resilience while remaining carefully outside the GMO line. Although Cibus is fiddling with plant genes, the technology is not the same as genetic modification and is therefore not classified as “GMO” by the U.S. Department of Agriculture. This means Cibus’ crops can wear the label of “non-GMO” once they reach the shelves, a boon for farmers in need of consumer-friendly crops.

Critics of the technology fear gene editing is just “GMO 2.0” — a new and not-yet-regulated way to play with plant genes. But Cibus and other experts in the field say those fears are unfounded.

Traditional genetic modification involves inserting a completely foreign gene (from an animal or bacteria, for example) into a plant’s chromosome — like strawberries being injected with fish genes to protect the fruit from freezing. Much of the public has taken issue with the process, though there is not yet proof that GM plants are dangerous to human health.

Even so, consumer demand is shaping the marketplace, and scientists are being called to find new ways to improve crop yields without provoking the public. The new technology used by Cibus — called gene editing — is a less meddlesome way to improve plants. Instead of inserting a completely foreign gene into a plant’s chromosomes (like genetic modification), gene editing only plays with the crop’s existing DNA.

Greg Gocal, senior vice president of research and development at Cibus, said the company is adding much-needed diversity back into domesticated plants. Diversity exists naturally in the wild, but over time domestication has edged out certain undesirable traits. For example, the corn stalks ancestor (a plant called teosinte) didn’t look anything like corn in its early days.

“You wouldn’t even recognize it,” Gocal said. “The kernels were encased in a hard capsule, and it was much smaller.”

With time, people selected certain mutated strains of the plant that produced desirable traits, such as big ears of corn with the kernels growing on the outside. “But by selecting for that trait, you may have lost some of the plant’s disease or drought tolerance,” Gocal said. “Plants need those traits, because plants can’t run away from whatever is preying on them.”

Cibus’ plants are designed with the best of all worlds combined — plants that have certain defensive traits while also increasing things such as yield.

“These are outcomes that have been allowed by nature, and could happen in nature if given enough time,” Gocal said. “That’s the main difference between gene editing and gene modification.”

Cibus has launched its first commercial crop, SU Canola, an herbicide-tolerant crop that’s heartier and less susceptible to shatter (when plants fall apart on the ground). The company also has three other crops in development: potatoes, rice, and flax. The potatoes are less prone to late blight — the fungal disease behind the potato famine of 1845. Cibus’ rice and flax are also herbicide tolerant.

Cibus, technically called a “trait company,” partners with seed companies and chemical companies to sell packages to farmers. These packages are usually complete with seeds and the herbicides to spray on them. For example, Cibus is partnered with chemical firm Rotam, which makes the herbicide Draft (approved for use on Cibus’ canola crop).

Each point of the triangle (seed, trait, and chemicals) receives royalties based off the crop sales, Gocal said.

Although Cibus sees its traits as a way to appease the fears of consumers, Maarten Chrispeels, an professor emeritus of biology at the University of California, San Diego says he fears the same organizations that oppose GMOs will also oppose gene editing, mostly out of ignorance.

“The public’s fear of GMOs is completely unfounded,” Chrispeels said. “The public does not understand GMOs, but they’ve been alerted by various organizations that GMOs might be bad for you. And those same organizations that have vociferously opposed GMOs have not yet weighed in on gene editing.”

So far, public aversion has not yet affected Cibus. The company claims to be the first to get a canola oil on the shelves that came from gene-edited, non-GMO plants. The canola oil is now selling in North Dakota, and the SU Canola crop is growing on over 10,000 acres in the Midwest.