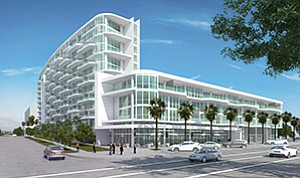 A residential condominium development, being planned by San Diego-based Pacifica Cos., is expected to be among the first elements in a larger multiphase plan to develop the 550-acre Chula Vista bayfront. Plans call for other developers to build hotels, restaurants, retail and related commercial and civic amenities over the next 20 to 30 years. Rendering courtesy of Pacifica Cos.

San Diego — Elements should begin falling into place later this year for long-sought commercial and residential development along the Chula Vista waterfront, including financing details on a centerpiece hotel and convention center.

Officials with the city of Chula Vista and Unified Port of San Diego remain in negotiations with Houston-based RIDA Development Corp. on a resort hotel with adjacent conference space, among several private developments projected to total $2 billion over the next 20 to 30 years.

The first element likely to move forward is a condominium project being developed by San Diego-based Pacifica Cos., which is currently revising and finalizing plans for the first 189-unit phase of what would eventually be 1,500 planned units to be built out over several phases.

The 550-acre Chula Vista bayfront area is one of just two major waterfront parcels in California — the other is the 400-acre Treasure Island in San Francisco Bay — still available for significant new master-planned commercial and residential development.

At a recent meeting where port commissioners were updated on the project, Adam Meyer, a real estate department manager with the port district, said a financing agreement on the resort element should be in place for port leaders’ review by the end of September 2016. Meyer told commissioners that “things are progressing well” in talks with RIDA.

“We continue to work with the city and the port on this project, but nothing has been agreed to at this point,” said RIDA Chief Operating Officer Luke Charlton, in an email to the San Diego Business Journal. “Until such time as we have a definitive agreement, we cannot comment on the negotiations.”

Also later this year, Meyer said, officials will be finalizing plans for natural resource management in the waterfront area, as well as the planned relocation of an existing RV park and the redevelopment of an existing marina located in the project area.

“This is a major, major project in terms of the (commercial) improvements and the environmental areas,” said Port Commissioner Dan Malcolm at a recent port district meeting.

Port officials last year chose RIDA as the exclusive negotiating partner, as the sides work out financing and other details for a resort hotel that would have up to 1,600 rooms and approximately 415,000 square feet of adjacent convention and meeting space. Plans also call for the same 35-acre parcel to have adjacent retail and restaurant elements.

RIDA has completed several other large-scale resort projects during the past 40 years, including the 720-room Omni Orlando Resort at ChampionsGate and the 1,400-room Hilton Orlando in Florida, and the 1,000-room Marriott Marquis Houston, adjacent to that city’s convention center.

RIDA officials said the privately-held company oversees more than 15 million square feet of real estate in Eastern and Central Europe, as well as the United States.

Pacifica Cos. spokeswoman Allison Rolfe said the developer is currently working with the city on a planned realignment of J Street, along with other infrastructure adjustments that should be finalized before year’s end. That could allow construction to begin next year on the first 189 residential condominiums planned for the waterfront.

Among other matters, developers are adjusting the condo project to incorporate recent guidelines issued by the California Coastal Commission related to projected long-term changes in sea levels and their potential impact on waterfront developments in the state.

Pacifica’s long-term plans call for a multiphase, 1,500-unit residential community, expected to involve between $700 million and $1 billion in development costs over the next 30 years. Unit pricing and construction timetables will hinge on overall market demand.

“It’s really going to depend on how those first units sell,” Rolfe said.

Chula Vista City Manager Gary Halbert said the Pacifica and RIDA developments are expected to be the first projects in the first phase of what is anticipated will be four overall phases of development over the next 25 years.

He said the RIDA resort-convention center project would provide an important venue for large meetings, in an area of San Diego County that does not currently have any significant conference facilities. If the resort ends up containing the maximum allowed 1,600 guest rooms, that would account for more than half of the total 3,100 rooms expected to be added by various developers by the time the full waterfront is built out.

“We’re down to the point where we’re crunching the final numbers,” Halbert said of ongoing talks between local officials and RIDA.

Port and city officials have projected that the waterfront development by full build-out will create nearly 7,000 construction jobs, with 2,200 permanent jobs and numerous other indirect new jobs for the regional economy.

When completed, 40 percent of the waterfront project area — 234 acres — will be dedicated to parks, open space and habitat restoration and preservation, with 130 new acres identified for parks and open space providing public access.

The overall waterfront plan, approved by the state coastal commission in 2012, calls for a total of up to three hotels, along with 220,000 square feet of commercial recreation and marine-related offices, 100,000 square feet of restaurants and 245,000 square feet of retail. Much of the visitor-serving amenities and mixed uses will be clustered in the Harbor District to reduce impact on environmentally sensitive areas.

In addition to generating new hotel-related tax revenue, Chula Vista officials have said the bayfront project is key to boosting the city and South Bay’s profile as a destination for recreation and eco-tourism.