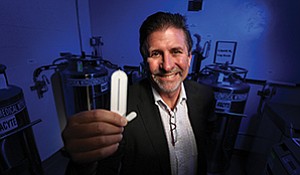 ViaCyte CEO Paul Laikind holds two thin capsules, one for humans, another for lab mice, that contain insulin-producing cells. The therapy could significantly alter the quality of life for people with type 1 diabetes.

As part of the deal, J&J is handing over assets of its New Jersey-based subsidiary BetaLogics, recognizing that it may be more fruitful to team up with ViaCyte rather than compete with it.The absorption of the New Jersey firm consolidates ViaCyte’s position as a leader in stem-cell-derived therapies for diabetes.

“There really is only one competitor in this field who has been working as long as we have, and that’s BetaLogics,” said ViaCyte CEO Paul Laikind.

Type 1 diabetes is a chronic, life-threatening condition that occurs when the immune system attacks the insulin-producing cells in the pancreas. Without insulin, cells throughout the body cannot convert sugar into energy, and people with type 1 diabetes must get an outside source of the hormone, usually from an insulin pump or regular insulin injections.

Many patients can’t control the condition well because treatment is exhausting, requiring a strict diet, frequent exercise, multiple daily insulin injections and several finger pricks a day to test blood sugar. Put simply, people with the condition have to manually perform the work that a healthy pancreas would do on its own, said Dr. Athena Philis-Tsimikas, a diabetes expert unaffiliated with ViaCyte.

ViaCyte’s would-be treatment for type 1 diabetes involves inducing embryonic stem cells in a lab dish to mature into insulin-producing cells. These cells are then placed in a thin capsule that’s implanted underneath the skin of the patient. The capsule, about the size of a business card, protects the cells from the immune system, which otherwise would attack them as invaders (a roadblock that has foiled research projects in the past). These cells, trapped inside the confines of ViaCyte’s capsule, produce insulin that the patient’s own body cannot.

If the therapy works as well in patients as it has in animals, it could significantly lighten the load on patients managing their own care, Philis-Tsimikas said.

While others have undertaken similar efforts in recent years (Cambridge, Mass.-based Semma Therapeutics Inc. raised $44 million last year to advance its own approach), ViaCyte is believed to be the first company to reach clinical trials.

The recent asset deal with J&J comes on the heels of promising early data from ViaCyte’s first round of human trials. BetaLogics is not only transferring physical assets such as equipment, materials and supplies to ViaCyte, it is also handing over hundreds of patents along with relationships with experts, consultants and companies in the device area.

Combining BetaLogics with ViaCyte also consolidates Johnson & Johnson’s investments in both companies. ViaCyte has received a total of $20 million in financing from J&J, or nearly a quarter of the $81 million the San Diego company has raised in venture capital. The

California Institute for Regenerative Medicine has committed $56 million to ViaCyte, and the Juvenile Diabetes Research Fund has awarded $13 million in grants, Laikind said.

As the single-largest investor in ViaCyte, Johnson & Johnson is an equity owner of the company with roughly a 20 percent stake, Laikind said. As part of J&J’s $20 million investment back in 2014, the company is guaranteed a right of first refusal (meaning J&J gets first dibs on ViaCyte’s technology should it choose to sell it).

If successful, ViaCyte’s lead product could be available to treat type 1 diabetes patients in a matter of years, “not decades,” Laikind said. The company intends to pursue possible applications in type 2 diabetes down the road.

“This is a breakthrough approach, and we’re blazing the trail with it” Laikind said. “The recent data suggests we’re on the right track. Combining our efforts with BetaLogics gives us a lot more horsepower to make this successful. Hopefully, we can transform the way this disease is treated.”