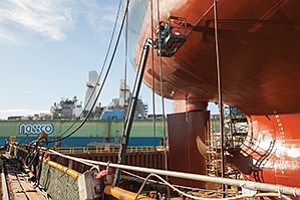 The NASSCO unit of General Dynamics Corp. is experiencing a slowdown though in the years ahead it will build two commercial ships for Matson Navigation Co. Inc. and six U.S. Navy oilers — possibly more.

The defense world is like an aircraft carrier. It can’t turn on a dime.

November’s election, however, might signal a big, slow turn.

The 2016 election will soon put a new set of decision-makers in charge of the Pentagon. President-elect Donald Trump says he’s for a strong defense. That would seem to please a Republican-controlled Congress — the entity that holds the Pentagon’s purse strings.

Trump has called for repealing sequestration. That’s the name of a 10-year program of budget cuts meant to reduce the federal deficit. It’s set to return in 2018 following a two-year absence.

Trump has also called for building the size of the U.S. Navy from the current 273 ships to 350. In the long run, that would likely increase San Diego’s Navy force (which is already expanding under the Obama administration’s Pivot to the Pacific) and generate more work for the ship repair industry.

Whether this growth materializes depends on how Trump turns his words into actions in 2017.

Today, defense contracting employs 33,400 people in San Diego County, according to the San Diego Regional Economic Development Corp. To get that figure, the EDC said it specifically counted jobs in the aerospace, navigation and maritime technology clusters.

Who’s paying for those contractors’ products and services? Uncle Sam and, in some cases, friendly allies.

Privately held General Atomics Aeronautical Systems Inc., for example, expects to get a large order soon from the U.K.’s Royal Air Force for an improved version of its Predator B unmanned aircraft.

San Diego County is expected to benefit from $8.7 billion in military procurement in 2017, up from an estimated $8.6 billion in 2016, according to a recent study commissioned by SDMAC, the San Diego Military Advisory Council, an organization of business and military leaders.

Defense is not entirely a growth story. The NASSCO unit of General Dynamics Corp. (NYSE: GD) is experiencing a slowdown and could lay off as many as 715 employees in January. The years ahead, however, will see it build two commercial ships for Matson Navigation Co. Inc. and six U.S. Navy oilers — possibly more.

Total military spending for San Diego County — including paychecks for uniformed and civilian employees of the military services, as well as military pensions — added up to $23.3 billion in 2016, according to the SDMAC study.

With all this spending, the Defense Department can take credit for roughly 20 percent of the region’s economic output and 1 in 5 San Diego County jobs, by SDMAC’s estimation. Those figures consider both direct and indirect (multiplier) effects of all Pentagon spending. For example, the eatery just outside the military base can enjoy stellar sales and hire more workers because there are more sailors spending their paychecks on lunch.