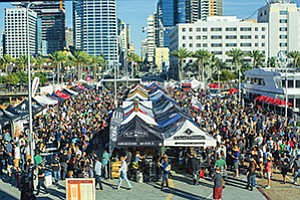 San Diego County’s craft beer brewers continued to grow their local and global footprints in 2016, even as the U.S. industry overall began to show signs of slowing growth after several years of rapid acceleration in consumer demand.

The number of local licensed breweries and brewpubs was still on the rise as the year drew to a close – 131 in operation as of mid-December, with 24 more in various stages of planning or licensing approval, according to the San Diego Brewers Guild.

The growth was evidenced in 2016 by Stone Brewing Co.’s opening of new production facilities in Berlin, Germany, and Richmond, Va. Local competitor Green Flash Brewing Co. opened its own East Coast production operations in Virginia Beach, and Ballast Point Brewing & Spirits announced that it would be joining its rivals in Virginia, with plans to invest $47.8 million in new operations in suburban Roanoke.

Meanwhile, the California-centric Karl Strauss Brewing Co. opened new locations of its brewhouse eateries in Anaheim and Los Angeles, as it planned for upcoming large new facilities in Santee.

Spreading its brand further, Stone Brewing was preparing to open a new taproom in the heart of Napa’s wine country, while designing a new beer-themed hotel slated to be built adjacent to its Escondido flagship facilities. But there were also signs of pullback, with Stone making the tough decision to lay off about 60 of its 1,200 workers as it reconfigures its global operations.

Smaller players were feeling even tougher effects of the intensifying competition. Local beer industry observers counted at least six brewery closings in the past year, with the casualties including Santee’s Twisted Manzanita and Miramar’s Pacific Brewing Co.

“We saw a cresting of the growth in 2016, and we’ll continue to see that in 2017,” said Vince Vasquez, an economist with San Diego-based National University System who tracks the beer industry. “The competition is more fierce than it has ever been, and the bar for financial success is higher than ever.”

The economist said there are still untapped opportunities to serve fresh beer to locals, especially in several pockets of San Diego County that have few or no brewpubs that are convenient to visit. However, many brewers are finding the retail side increasingly challenging as craft brands proliferate. “There’s only so much shelf space, and stores can only sell so many skews of each beer,” Vasquez said.

To stand out, craft brewers in coming months may need to get more strategic about their offerings – extending existing brands, for instance, the way Ballast Point has successfully built sales of its Sculpin IPA by coming up with several different flavors and variations. “Making good craft beer is not enough anymore,” Vasquez added.

Despite recent setbacks, Vasquez said the local beer industry, which generated sales of $851 million in 2015, has the ingredients for long-term sustainability. Craft beer has become a focal point of local tourism, and a strong educational infrastructure is in place with certificate and training programs now offered by entities such as the University of California, San Diego and San Diego State University.

Jill Davidson, president of the San Diego Brewers Guild, said local brewers still have room to grow sales, especially among younger consumers and others who prefer local and artisan-style brews and foods. She said there may be further opportunities to grow the local industry by forming production and distribution partnerships with brewers in Mexico’s Baja California region, where a craft-brew culture is already well established in Tijuana and other cities.

“There are enough brewers here, and a culture of demand for the craft beer here, which should carry forward long-term,” Davidson said.