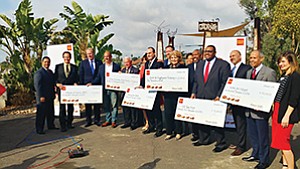 The grants are funded through Wells Fargo’s NeighborhoodLIFT program that was launched in March 2016 for San Diego homebuyers with a $5 million commitment by Wells Fargo to boost local homeownership and revitalize neighborhoods. NeighborhoodLIFT will create about 450 homeowners in San Diego through homebuyer education plus matching down payment assistance grants up to $7,500. Wells Fargo is collaborating with the City of San Diego, National City, national nonprofit NeighborWorks America, and its local network member, Neighborhood Housing Services Inland Empire, to implement the program. More than 400 down payment assistance grants are still available and interested homebuyers may contact NHSIE or Wells Fargo Home Mortgage in San Diego for information about eligibility requirements. Visit wellsfargo.com/mortgage/lift.

United Way of San Diego County honored Deborah Szekely and Kenneth Weixel for their consistently outstanding community leadership and volunteerism. They were recognized at a special reception at the nonprofit’s Murphy Canyon building recently. Laurie Coskey, United Way’s president and CEO, presided over the ceremony.

Szekely was the recipient of the James F. Mulvaney Community Leadership Award, which is given to a local leader who has demonstrated long-lasting, exceptional service to the San Diego community. The award is named for James Mulvaney who maintained involvement in numerous nonprofit boards and organizations for 50 years.

Weixel was the recipient of the “Volunteer of the Year” Naish Award, which recognizes an individual who has made a significant and sustained contribution to United Way as a volunteer and commemorates the extraordinary commitment of Jack Naish, a former board member and creative leader. On the board of United Way and its current campaign cabinet chair, Weixel is a San Diego managing partner for Deloitte LLP.

The seventh annual Miracle Babies gala was held recently at the Fairmont Grand Del Mar and raised nearly $300,000 to support families with critically ill newborns in the neonatal intensive care unit. The gala was chaired by Tamara Lafarga-Joseph, and included a cocktail reception, gourmet dinner, a live auction and live entertainment with professional dancers.