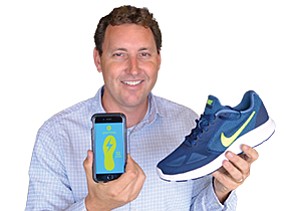 Sensors inside a running shoe, like the one UCSD’s Don Sirbuly is holding, may be part of the next wave in wearable technology. Photo courtesy of SmartFoam

San Diego — Don Sirbuly sits at his office desk at UC San Diego’s engineering school and offers me a squishy piece of black plastic foam about the size of a dime.

It doesn’t look or feel different from any other spongy stuff — such as packing material, earplugs or shoe inserts — that I’ve encountered before, but there is something different about it.

It gives off a little bit of electricity when you squeeze it.

Sirbuly is an assistant professor with the NanoEngineering Department at the Jacobs School of Engineering. The foam he has given me is packed with tiny piezoelectric particles that turn mechanical energy (such as a squeeze) into electrical energy.

The foam can work in reverse as well. The nanoparticles can turn electrical energy into mechanical energy.

One of Sirbuly’s graduate students, William R. McCall, came up with the material, whose proper name is piezoelectric nanoparticle-polymer composite foam. The invention is the property of the university, which has applied for a patent.

Now a startup funded by San Diego-based NextWave Venture Partners wants to license that technology in a company it has named SmartFoam.

NextWave’s business team is consulting with Sirbuly on how to turn voltage-generating foam into something practical.

They have several ideas, starting with the foam’s ability to serve as a sensor, giving off electricity when moved.

SmartFoam sensors might detect when and how much force is being exerted on any particular spot inside the footwear. Signals might be transferred from the interior of the shoe to an application running on a smartphone. Bluetooth close-range technology could make the connection wirelessly, Clottu said.

SmartFoam plans a soft launch of a shoe product during the fourth quarter of this year, and a larger rollout in the first quarter of 2017, Clottu said.

The business is also eyeing the mattress market, which is worth about $15 billion. Foam sensors could monitor sleep habits. The business is mulling foam sensors for office chairs or car seats. There may also be an application in caring for premature babies. Soft foam sensors on an infant’s body might sound the alarm if the baby stops breathing.

The potential doesn’t stop there. Company founders went as far as to speculate that people might one day put piezoelectric materials under sports playing fields. That way the action of a soccer game could help generate the electricity to light the stadium.

Sirbuly is a 40-year-old Carlsbad resident who received his doctorate in chemistry from UC Santa Barbara. Not so long ago, if you had asked him about piezoelectric materials, he would have associated them with “very brittle” products, such as ceramics. Such materials could not be like the one I held in my hand.

“It’s squishy,” the professor said. “That’s so far from a typical electro-ceramic material.”

By the way, the size of the SmartFoam sample I am holding — about 1 cubic centimeter — is by no means a maximum size for the sensor material. A factory could possibly turn out large sheets of the piezoelectric foam, Sirbuly said. “It’s a scalable process,” he said. At one point he likened the material to pizza dough that could be rolled out.

NextWave Venture Partners, managed by Jeff Slosar, is raising $150 million for its second fund. SmartFoam and MouthSense are the first companies in the fund. The venture capital group hopes to attract $150 million to put toward 25-30 technologies over the next 18-24 months, Clottu said.

ServiceNow founder Fred Luddy is one of the fund’s first investors.

What makes the company innovative: The company is licensing a unique, malleable material called piezoelectric foam from the University of California and plans to make products that use its electricity-generating properties