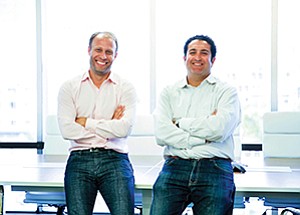 Where Does S.D. Stand With VC?

San Diego’s venture capital numbers may pale in comparison to Silicon Valley, but let’s be honest: Silicon Valley shouldn’t be the yardstick.

VC numbers show San Diego is beating out other highly publicized hubs of startup activity across the country.

A prominent venture capital report from PricewaterhouseCoopers and the National Venture Capital Association showed a significant bump to the region’s VC haul in the latest quarter, with San Diego attracting $350 million compared with $134 million in Q2 of last year.

It’s important to note that Q2 included a mega-deal from Human Longevity Inc., which brought in $220 million during the quarter. Without the deal, San Diego’s venture haul was consistent to 2015’s numbers.

But not all venture capital reports agree on San Diego’s deal volume. Mattermark, a San Francisco startup that mines and crunches internet data for investor intelligence, found more deals than the previous two reports. The company reported $463.4 million in VC money going to San Diego companies in the second quarter, up from only $164 million in Q2 2015.

And according to Mattermark’s records for Q1 (not including the Human Longevity deal), San Diego is bringing in more venture capital than Houston, Dallas, and Denver-Boulder combined.

San Diego — A venture capital firm interested in funding local software startups has launched a new fund in San Diego — possibly the first of its kind.

The group, called Analytics Ventures, is placing its bets on tech companies dealing in data. The city is better known for pooling money around the biotech and pharmaceutical industries, with venture firms such as Domain Associates and Avalon Ventures investing in drug development and medical devices.

But this new VC firm is not interested in backing the next big drug or therapy.

Situated in the heart of San Diego’s downtown technology hub, Analytics Ventures partners Navid Alipour and Andreas Roell have their eyes on a different prize.

“There has to be a software component with our companies,” Alipour said. “There’s value in real-time, and there’s value in data that’s sitting in a warehouse. Anywhere you can glean operational efficiencies — save money or make money — that’s what really excites us.”

And though the company previously invested in companies that fuse health care with software, Analytics Ventures is vertical agnostic.

Analytics Ventures, founded by Alipour and Blaise Barrelet, started out as an angel accelerator fund in 2013 (meaning they invested their own money rather than venture money).

After a few successful exits, they raised a dedicated fund and became institutional VCs. Today, the fund has eight startups in its portfolio, including TapHunter, South Doctors and CureMetrix.

Analytics Ventures didn’t disclose the size of its fund, but sources familiar with the company said the firm has closed $5 million and hopes to raise $25 million total. Alipour said some of the cash from the fund is already deployed to startups in the company’s portfolio.

In a city with a burgeoning software and technology hub, Analytics Ventures is surprisingly the only software-focused VC firm doing strictly early-stage rounds.

The lack of local venture money is a constant gripe made by startups and startup groups, and one expressed on every forum imaginable — roundtables, conferences, networking events, and even posted on social media pages dedicated to the San Diego tech community.

“It’s pathetic how little money is here; there is no money in San Diego for startups,” said Greg McKee, president of startup accelerator CONNECT, in an interview earlier this year.

And McKee is largely right. Although hundreds of millions of VC money flows into the region each year from outside sources and angel investors, the city has few institutional venture funds at home.

Save It for Later

Qualcomm Ventures has dabbled in early-stage funding, but tends to place bets on more developed startups. San Diego’s JMI Equity and TVC Capital also stick to later-stage investments (which is not, by the way, uncommon for venture capital firms these days).

“The hardest part for San Diego startups is that valley of death, that space from inception to Series A,” Alipour said. “That’s the gap we’re trying to fill.”

Angel investing has its place, said Roell and Alipour, but there are downsides to a strictly angel community.

“There are no requirements put on angels,” Roell said. In other words, angel investors can “light their cash on fire, then go play golf” if they wanted, Alipour said. It’s their money.

“As an institutional fund, on the other hand, we have fiduciary responsibilities to our investors,” Roell said. “At the end of the day, that drives us to be very disciplined in how we work with these companies.”

Analytics Ventures is structured in a way that’s growing in popularity for early-stage investors — a model called a “venture studio.” In this model, the venture firm actually co-founds the portfolio companies, taking an ownership stake and a very active role in the startup’s leadership.

“To be successful in the early-stage seed environment, you have to be willing to put in the hard work,” Roell said. “You have to guide your portfolio companies and be there for them.”

Among other things, Analytics Ventures provides operational support (things like IT and HR) and takes over fundraising for the company’s next round.

“Early-stage ventures spend so much time in those areas, areas that are not core to their business, and they lose valuable time as a result,” Alipour said.

Analytics Ventures is not the only venture studio model in town. Both Domain Associates and Avalon Ventures are structured in a similar way. And it makes sense, as it helps reduce risk for the investors, and helps early-stage companies with top-level guidance when they need it most.

“We can have a good return on investment on these companies we start with a venture studio model,” Alipour said. “Our hands aren’t’ tied. If we get an offer to sell a company for $10 million, and we won a big piece of the company, that could be a good return for us, our investors and our other founders. Whereas with traditional venture models, a $10 million exit is not a good exit.”