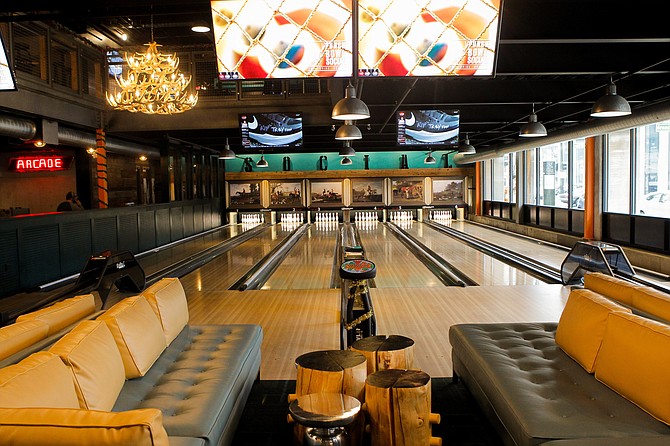 The Punch Bowl Social planned for Makers Quarter will have bowling lanes and other on-site games, along with a restaurant. The company’s Detroit location is shown here - Photo courtesy of Punch Bowl Social

A statement from Makers Quarter’s developers said Punch Bowl Social will renovate the approximately 20,000-square-foot building, after signing a lease in July. Building improvements are expected to begin in September, with an opening slated for the third quarter of 2017.

The building, starting in 1924, housed the athletic club, which was one of three major boxing gym and fight clubs in Southern California. Boxing talent appearing there during the 1920s and 1930s included Henry Armstrong, Archie Moore and Jimmy Braddock.

According to developers, the club survived a 1938 fire but shut its doors in 1974 due to debt issues. The property was later acquired by the Navarra family, which used the building for its Jerome’s Furniture warehouse and other subsequent uses.

Punch Bowl Social has six current U.S. locations, with other upcoming openings planned in Brooklyn, N.Y., and Sacramento. The San Diego location will include a restaurant with games such as pinball, skeeball, shuffleboard, ping-pong and vintage video games.

Makers Quarter is a multi-block, mixed-use community being developed by L2HP, which includes Lankford & Associates, HP Investors and Hensel Phelps.