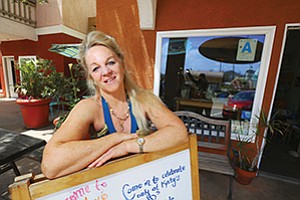 Café owner Katy Fallon celebrates 10 years in business in May

San Diego — People with memories of Imperial Beach who have not seen the place in 10 or 20 years may be in for a surprise.

New construction dominates the commercial strip on Seacoast Drive between the community pier and Palm Avenue. Spa treatments, fancy cupcakes and handcrafted, $36 margaritas are among the high-end treats available.

The old days aren’t gone. You can still get a beer at Ye Olde Plank Inn. But if you have kids in tow and you prefer a fruit-flavored IPA, the Coronado Brewing Co. is a new option.

The San Diego Unified Port District started the transformation with an estimated $15 million of capital improvements and public art projects, beginning in the late 1990s. City Hall has also been busy with redevelopment efforts. Demolition of a decrepit motel and its replacement with a new business in 2013 seems to have spurred the most recent changes. 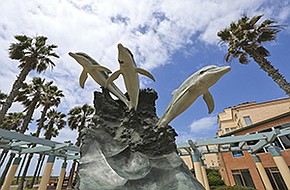 New businesses such as a hotel, below left, and brewery, below right, are driving an economic revival along Seacoast Drive in Imperial Beach. Other improvements include a dolphin sculpture, above, a park at the foot of the pier, bottom left, and fresh storefronts. 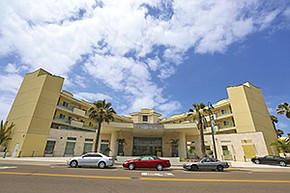 The hotel has 78 rooms as well as a spa and Sea180 Coastal Tavern. San 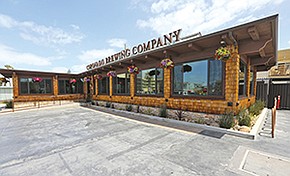 A “great” oceanfront site, a strong lodging market, a partnership with (and concessions from) city hall and an agreement with Marriott all convinced Pacifica to build, said Sushil Israni, managing partner of Pacifica Host Hotels.

The hotel property has become the anchor for Seacoast Drive, said Mike Osborne, president of the Imperial Beach Chamber of Commerce. “You get Coronado people coming down,” said Osborne, who said the chamber’s and the city’s shared goal is to make Imperial Beach more family-friendly.

Another hotel is planned farther south, at Seacoast and Imperial Beach Boulevard.

Family-owned restaurants seem to have gotten the jump on chain eateries in expanding to Imperial Beach.

David Cohn of the Cohn Restaurant Group said chains want to see certain demographics before committing to a location. Cohn said his Imperial Beach restaurant was part of his business’ push to open locations in underserved markets, including Oceanside and Escondido.

He declined to give sales figures but said Sea180 has exceeded yearly sales goals by 30 percent.

Coronado Brewing Co. opened its Imperial Beach tasting room a short distance from the hotel in late 2014. CEO Ron Chapman also declined to give figures but said revenue has been “beyond expectations.” Now other restaurant chains are making plans for Imperial Beach, he said.

“People like to see somebody test the waters,” Cohn said.

Meanwhile, construction continues. The new resort, upscale restaurants and street upgrades attracted San Diego’s Citymark Development to build its first project in Imperial Beach, vice president Russ Haley said. Citymark took two lots totaling 20,000 square feet at Seacoast and Evergreen, directly across the street from the pier, and is building a restaurant space with 14 townhouses on the upper floors. Condominium prices will start in the $600,000s.

Several blocks inland from the beach, where Palm Avenue veers north to the Silver Strand, Sudberry Development is building a retail center on property that City Hall worked for years to redevelop. By now an old strip center has been bulldozed. Some 33,500 square feet of space, split among multiple buildings, is planned for a shopping center to be called Breakwater Town Center.

The promise of an expanded U.S. Navy base seems to be one incentive for developers. The Navy has embarked on a 10-year plan to put 1.5 million square feet of buildings — a modernized base for its SEALs — on the Silver Strand. The new main gate for the $800 million project will be a little more than a mile to the north the Sudberry center. The Navy plans a gas station and mini-mart, but it looks as though Imperial Beach will offer a wider range of eating options — not to mention a place to go off-base.

Another commercial project, the $6 million Bikeway Village on 13th Street, at the southern edge of San Diego Bay, broke ground in January. Nearby, within San Diego city limits, the port district is contemplating 3 acres of commercial development. The latter parcel is part of an expanse known as Pond 20; the majority of that land will be set aside as wetlands.

Osborne, the chamber president, is enthusiastic about the changes, though he said he would prefer not to have the intensity of development he has seen in Coronado or Pacific Beach. “We don’t want to be P.B. South,” he said.

Small business owners have been able to claim parts in Imperial Beach’s transformation.

On the last Sunday of April, Katy Fallon had her hands full. A line of people stretched from the counter of her eatery, Katy’s Café, halfway to the front door. Mermaid and fish figurines hung from the ceiling. Pineapples lined the top of the kitchen divider. Customers sat in the sun in an eclectic collection of tables and chairs on the back porch. A few hundred feet away, green waves broke at the beach.

Fallon is the business’ fifth owner. She bought it when it was called I.B. Coffee and Books, changing the name two years into her run when she was a little more sure that the enterprise could sustain itself. Today, she has 10 people on the payroll, and she will be marking her 10th anniversary in May.

Several blocks to the south on Seacoast Drive, Christopher Stavros is completing his second year in a storefront. It is the second location of his 9-year-old Hillcrest-based business, Babycakes. The Imperial Beach location sells a wide selection of gourmet cupcakes and coffee drinks.

Stavros has a long-term view on the community; he has been a resident for 16 years. He said that a turning point was the arrival of the Pier South Resort, and the tourists.

Over the years, Stavros said, he had a feeling that Imperial Beach was ripe for change. “It slowly is happening,” he said.