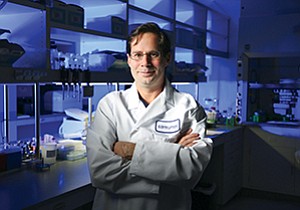 San Diego — Osman Kibar is nonchalant, as billionaires go, but he’s nothing if not confident. Dressed in a fading polo shirt and old jeans, he leans back in his chair, intertwines his fingers and fights a knowing smile. He knows why I’m here.

Kibar, 45, is founder and CEO of Samumed LLC, a stealthy biotechnology firm that until a few months ago had been flying under the radar in San Diego. Following eight years of research, the company recently decided to step into the limelight, disclosing its story exclusively to longtime biotech reporter Matthew Herper at Forbes.

Samumed intends to reverse the aging process, and its drug programs are already underway. The company has successfully grown hair on bald men, regenerated cartilage in arthritic joints, and the technology may one day erase wrinkles on aging skin. Recently valued at $12 billion, the biggest valuation in history for a drugmaker with no approved drug on the market, Samumed might be onto something.

As Herper put it, the San Diego firm is “the most valuable biotechnology startup on the planet.” If, of course, the science pans out.

Aside from the shiny new placard recently affixed to the building’s exterior, there’s hardly a sign the company has been operating in San Diego for the last decade. Inside the building, the walls are sparsely decorated, and the cubicles are empty. The labs, however, are bustling.

Samumed is researching 11 drug programs with its technology, five of which are already being tested in humans. This is rather impressive for a biotech firm, considering most local biotechs are what the industry calls “one-trick ponies.” These companies generally build one valuable asset until it catches the eye of Big Pharma, then the company sells, the founders and investors cash out, and the employees move on to the next whiz bang startup.

But Samumed has a different strategy, Kibar said.

“We’re sitting on a goldmine, and this is only the tip of the iceberg,” Kibar said. “If our strategy was to sell, no one could afford us.”

The assertion might seem arrogant, and perhaps it is. But Samumed’s investors tend to agree with Kibar. The company has raised $220 million since its inception (with another $100 million in the works), with investors including IKEA’s private venture firm, anonymous high-net-worth individuals and a single venture capital firm called Vickers Venture Partners.

A quick review of Samumed’s investors might throw a red flag to those familiar with the biotech scene. The biggest investors are a furniture company and a venture firm with no history of drug discovery investments. How could they recognize a valuable investment when they saw one?

Finian Tan, chairman at Vickers, explained that Samumed was the first of many investments in drug discovery. Tan himself is no rookie in life sciences, either. In fact, he’s served as executive deputy chairman of Singapore’s National Science and Technology Board, as well as on the boards of The National Cancer Center of Singapore, venture firm Life Sciences Investment, and SingHealth, the biggest health care group in Singapore.

The results – although seemingly minor – are exciting. Not even Rogaine can cause a noticeable regrowth of hair (at most it will prevent a receding hairline from disappearing altogether).

“Everybody knows how important hair is to many of us,” Tan said. “It’s our crowning glory. And to date, nobody has been able to grow hair safely.”

But Herper expects the real value is in Samumed’s arthritis data. More than 27 million Americans suffer from arthritis as the cartilage that cushions their joints wears away. There’s no real treatment besides pain medication, which can exacerbate the problem (feeling less pain, patients tend to move around more and wear down that cartilage even more). Every year, 700,000 people have their knees replaced with metal joints because their bones have been rubbed raw by age and activity. Another 300,000 get artificial hips.

The largest study of Samumed’s arthritis drug, which included only 60 patients, finished with impressive results, even for a small trial. On X-rays of patients’ knee joints, the space between the bones seemed to have increased, indicating cartilage might really have grown back. Patients on the drug also reported less pain and more overall function.

It’s important to note that 80 percent of new drugs that reach this stage of research fail to make it to market. Even Samumed’s own consultants and Kibar himself say the data is preliminary. More proof will come from a 445-person trial that Samumed aims to complete by the end of the year.

Even with the company’s head-turning data, many are skeptical of Samumed’s valuation. The most valuable public biotech with no approved drugs is worth only $6 billion – half of Samumed’s estimated worth.

Jay Lichter, a longtime biotech venture capitalist at Avalon Ventures and a veteran life science executive, was unsure if Samumed’s value was warranted.

Theranos is a Silicon Valley blood-testing company that private investors valued at $9 billion before the accuracy of its tests was challenged. That valuation may now drop to zero as the company gets investigated for criminal behavior. The company has become the poster child for over-valued unicorn companies that end up burning investors when the science doesn’t pan out.

Kibar said the company has had extensive work done by third parties to estimate Samumed’s value. Samumed went to Bain & Co. for market size, penetration rates, and bottom-up revenue projections for each clinical program. They went to Perella Weinberg to translate those market numbers and projections to adjusted/discounted valuation ranges. The $12 billion number was a low ball.

“Anybody who can grow cartilage safely will be bigger than Apple,” he said in an email.

It’s not unheard of for a single drug to skyrocket a company’s valuation. Sovaldi, the cure for hepatitis C that generated $32 billion in revenue for Gilead Sciences, was purchased for $11 billion in 2011, and that was a single drug. Samumed is promising something bigger. In the U.S., about 3.2 million people have been diagnosed with chronic hepatitis C. Samumed, by comparison, is developing a drug to treat osteoarthritis – a condition that affects 27 million people in the U.S. alone.

Although the data is early and not yet complete, it’s understandable why excitement is starting to pool around Samumed.

Yusuf Yazici, a top New York University rheumatologist, was consulted early on in Samumed’s development. During the first overview of the company’s technology, Yazici texted Samumed’s chief financial officer: “You have to get me in on this. Osman has found the God pill.” Yazici is now Samumed’s chief medical officer.

Data on a larger patient pool, of course, will speak louder. The company expects data on its Phase 2 trial to be completed by the end of this year.

Kibar founded Samumed in 2008, and has been at the helm ever since as its chief executive. When he was 29, Kibar founded Genoptix, a cancer diagnostics company, which was acquired by Novartis in 2011 for $470 million. He also cofounded E-Tenna, which made antennas for the wireless industry and was split up and sold to Intel and Titan Corp. He’s also served as a vice president at Pequot Capital’s venture capital and private equity team.

Kibar received his M.S. and Ph.D., specializing in biophotonics and pptoelectronics from the University of California, San Diego, a B.S. in Electrical Engineering from Caltech and a B.A. in Mathematical Economics from Pomona College. 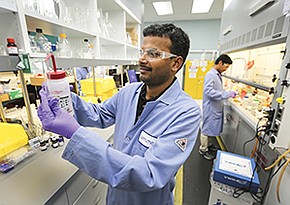