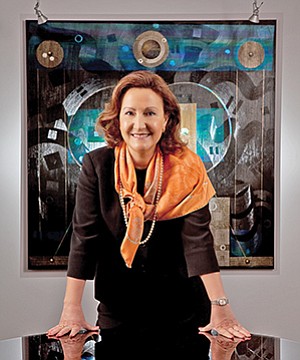 Magda Marquet and her husband intended to stay in San Diego for just a few years. That was 29 years ago. Photo by Ted Jacobs at Cushman & Wakefield

Magda Marquet sits across from me, eyes twinkling above a porcelain mug. We’re at a venerable beach club in La Jolla, where she knows the whole staff by name. She says “please” and “thank you” and smiles gently as the waiter pours our coffee. As one of the most influential women in local biotech, I expected her to be louder, somehow. More demanding.

But Marquet leads with logic, not force. A scientist by training, Marquet has served the biotech community for over 25 years. Among many things, she directed development at Vical Inc., patented novel methods for DNA production and, most notably, co-founded Althea Technologies — which at its height employed over 200 people in San Diego.

She’s a member and past chairman of BIOCOM, the largest biotech association in the region, and she is currently chair-elect of the board of UC San Diego Moores Cancer Center.

But Marquet’s big impact to the life science sector had humble beginnings, she tells me, in a small country called Andorra. Tucked between Spain and France, the nation has a population of about 80,000 — smaller than a San Diego suburb. Marquet grew up in the beautiful, but severe Pyrenees Mountains, where winters are long and cold.

California dreaming likely took root in her formative years, she says, while the Beach Boys and the Eagles crooned about the sun and the surf.

Marquet went to college in France, at the INSA Toulouse, where she studied biochemical engineering. After graduation, she quickly found a job at the European biotechnology company, Transgene.

“At the time, it was the only biotechnology company in Europe,” Marquet said. “The industry hardly existed back then, and the people working at Transgene were from all over the world.”

That multicultural atmosphere fueled Marquet’s California dreams, she said. But more practically, Marquet and her husband, François Ferré, were both ambitious scientists who saw opportunity in the states. Ferré would pursue his post-doctoral research at the University of California, San Diego and Marquet wanted to join the burgeoning biotech cluster.

They took the cheapest, longest flight from Paris to Brussels, Brussels to Chicago, Chicago to San Francisco, and San Francisco to San Diego.

“I still remember getting off the plane, so tired, and seeing a woman holding a sign with our names on it,” Marquet said. “I thought we would only stay for a few years, until François finished his post-doc, and then we would go back. Now, we’ve lived in La Jolla Shores for 29 years.”

It didn’t take long for the husband-and-wife team to become highly regarded in the biotech community for their pioneering work in the fields of plasmid DNA production and gene quantification. In 1998, Marquet and Ferré founded Althea Technologies with the mission of accelerating drug development by providing services to the biopharmaceutical industry. The company steadily grew until 2013, when it was acquired by Ajinomoto Althea Inc., a Japanese company, for $175 million.

The couple also founded the Althea spinout, AltheaDX, a molecular diagnostics company in 2008, and Alma Life Sciences, an investing company in 2013.

Over the course of her career, Marquet held management positions at Vical Inc., Amylin Pharmaceuticals, Protein Polymer Technologies, and Syntro Corp. She has been involved in the startup and seed financing of 18 life sciences companies, including Traversa Therapeutics, Huya Bioscience, and Trius Therapeutics.

When you first started your career, I imagine you were a bit of a minority in biotechnology. What was it like being a woman in leadership working in a male-dominated industry?

I graduated in biochemical engineering, which is more of a male profession. I never really felt like people were treating me differently because I was a woman, but sometimes I might have had the impression that men had an advantage. But I didn’t want to be the victim. The way I saw it was…I’m the one who needs to know how to play. So maybe I worked a little harder sometimes. Many women go into the victim mode, and when you do that, you’re powerless.

I also like to point out that it’s OK for women to be women in business. When I was starting in my profession, we were dressing like men and trying to act like men. If you try to be a man, it won’t work. As a woman, you have to find your own power, your own voice.

You mentioned earlier that you and your husband received a little resistance from investors when you first formed Althea Technologies because funding married couples was risky. Do you still get that reaction sometimes?

No, not at all. In fact, it’s the other way around. For a while, my title was “co-CEO” and people would say, “What does that mean? It’s ridiculous, who is really in charge?” Eventually, we did bring in a new CEO and our titles changed. But people continued to introduce me as co-CEO, because it had become our brand. And for Alma, our investing company, we are still co-CEOs.

What are some of the early mistakes that entrepreneurs in your field often make?

In this arena, we become in love with our science, technology or product. People too often want to do these incredible things, but they cannot translate from an idea to a commercial place. This is the major challenge of entrepreneurship. To get everyone else to see that your idea is the greatest thing in the world, instead of only you thinking it’s the greatest thing in the world.

If you could travel back to the beginning of Althea Technologies, is there anything you would want your former self to know going in?

Sometimes I think, “Wow, I could have avoided making so many mistakes.” But when I really think about it, I wouldn’t change a thing. It was part of the learning. The main thing I’ve learned is to surround yourself with the best people, and give them the opportunity to grow.

What other advice do you have for startups?

Get the right investors; don’t just look for money anywhere. Look for people that will bring you money, and expertise. You want people who have done it before and have a Rolodex with connections. Look for mentors.