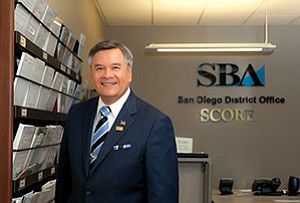 Ruben Garcia, the SBA’s director for San Diego, says the region is on track in 2015 to top its previous 7a lending record of $264 million, which was set in 2011 and supported by efforts to promote the federal stimulous package. Photo by Melissa Jacobs.

The Small Business Administration’s largest loan guarantee program is on its way to a banner year, with its popularity already forcing Congress to substantially increase its $18.75 billion cap to $23.5 billion. But SBA’s other guarantee program, which San Diego has historically dominated, is seeing decline from a 2012 peak as advocates push for added lending authority.

The most popular SBA program is for so-called 7a loans, where borrowers put down 10 percent, banks loan out 90 percent and the SBA guarantees the bank’s loan in case of default. The SBA collects fees from the banks to sustain the program.

The SBA reached its $18.75 billion guarantee cap in July, prompting a weeklong shutdown of the program as Congress scrambled to pass a $5 billion extension with two months left in the government’s fiscal year.

Nationally, the 7a program guaranteed more than $21 billion through the end of August, already surpassing the $19.2 billion guaranteed in all of last year. In San Diego, the SBA guaranteed $237 million worth of loans through the end of June, the most recent figures available, and is on track to top previous high of $264 million from 2011.

Garcia said 2011 saw a spike because President Obama was touting a series of programs tied to the 2009 stimulus. “This is natural growth,” Garcia said of this year’s 7a figures. “There’s no additional stimulus we’ve put into this thing.”

While small businesses are flocking to the 7a program, some alternative lenders are seeing the brief shutdown as an opportunity to draw borrowers into their ecosystems. Two former high-level SBA staffers wrote in American Banker a few days before the shutdown that Congress’ “glacial pace” to raise the cap after several warnings added “unneeded ambiguity” for borrowers.

David Goldin, the CEO of New York-based alt lender Capify, said the shutdown underscored that 7a borrowers were at the mercy of a divided government.

“The cheaper the money, the harder it is to get,” Goldin said. “SBA approval will never be 100 percent, and borrowers will realize how easy it is to get alternative financing, albeit more expensive.”

San Diego-based alternative lender Dealstruck said it saw a modest spike in interest during the shutdown as small business owners likely rushed to Google to research other places to borrow money.

“There’s a larger issue with how long it takes to get through the SBA process. The shutdown prolonged an already long process,” said Candace Klein, Dealstruck’s chief strategy officer. “Our biggest competition is not other lenders, but a lack of knowledge that we exist.”

Bankers counter that the weeklong suspension in 7a guarantees is unlikely to have a material impact on future 7a volume and that alternative lenders are not equipped to handle larger real estate loans. SBA Administrator Maria Contreras-Sweet also pointed to bipartisan action to raise the cap as evidence of Congress’ continued support of 7a lending.

“SBA is not here to compete with the private sector,” Contreras-Sweet said during a visit to San Diego last month. “We’re there to fill the gaps. I herald anybody that can help small businesses.”

But even at 7a is set to break records, volume for the SBA’s other lending guarantee program, called 504, has been dropping. From a high of $6.7 billion in 2012, 504 lending fell to $4.2 billion last year. Through the end of August, the program guaranteed $3.9 billion worth of loans, slightly higher than the $3.7 billion seen during the same period last year.

In a 504 loan, borrowers put down 10 percent, certified development companies (CDC) fund 40 percent of the loan and partner with a bank to handle the remaining half. Unlike more general-purpose 7a loans, the 504 program is earmarked for heavy equipment and commercial real estate purchases designed to foster economic development. San Diego was an early adopter of the 504 program and locally based CDC Small Business Finance has consistently been the nation’s top CDC.

“We have the best 504 lender here,” Garcia, the San Diego SBA director, said. “But like everybody else, they are experiencing a decline.”

San Diego saw just $50 million in 504 loan guarantees through the end of June and year-end figures may not beat the $87 million recorded last year, according to Garcia.

“The excess liquidity has pushed banks to be more aggressive to get money out there, with the assumption that eight years down the road, the loan would turn over,” Chilcott said. “They’re more competitive with 504.”

San Diego has the added problem of limited availability of industrial land, preventing small businesses from obtaining the properties they want. Chilcott also criticized the 504 program’s aging approval and closing processes, which can take more than three months and is more involved than 7a loans.

“The SBA process infrastructure is at best 20th century,” Chilcott said. “One of the reasons online lenders are successful is their experience is much better than it is with a typical bank loan. And for 504, that experience can take even longer and be even more bureaucratic.”

The National Association of Development Companies, a trade group for CDCs, is pushing to renew the 504 program’s authority to refinance commercial real estate loans, something added as a pilot program in 2011 but which expired a year later. Rep. Judy Chu (D-Calif.) introduced the CREED Act in May to extend the refinancing program for five years, and said the original pilot refinanced nearly $7 billion in debt.

There were 400 businesses in the pipeline when the pilot lapsed, according to NADC CEO Barbara Vohryzek, who estimated the added authority could add at least 20 percent to the 504 program’s volume. The CREED Act was introduced last year as well but stalled out, she said.

“It just ends up in the gestalt of things not moving through Congress,” Vohryzek said.

She added that the 7a program’s overwhelming support among elected officials did not mean 504 would get a similarly positive reception because far more bank business was tied to 7a loans.

“Frankly, I don’t have a Chase, I don’t have a Wells Fargo,” Vohryzek said. “They participate with us, but the 7a cap would have had a significant impact on those banks. We’re not quite in the same league.”

The SBA has also added 504 refinance authority to its proposed 2016 budget, and the agency said that it can move ahead if its budget passes, even if the CREED Act fails.

Chilcott agreed refinancing could help buoy 504 volume but cautioned that it shouldn’t become a major component of the program. 504’s goal is to expand small businesses, not restructure debt.

“The solution for 504’s relevancy is two-fold,” Chilcott said. “We need to retool the process and, with rising interest rates, the program will become more utilized. This has been an exceedingly, exceedingly, long cycle of low interest rates.”