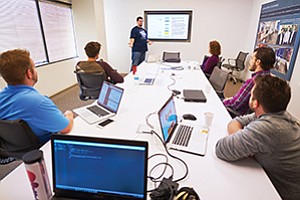 San Diego — Editor’s note: Shortly after this issue went to press, Dev Bootcamp announced that it was delaying the start of its first San Diego coding boot camp from Nov. 9 to Dec. 28. The business, part of the Kaplan test-preparation business, said the delay was because of construction issues at its downtown classroom space.

The recruits wear shaggy beards and it’s laptops, not rifles, that have become their new best friends.

High in a downtown office tower, six students in the inaugural class of Origin Code Academy are getting a 12-week, intensive course in writing computer programs.

The industry calls it boot camp, but it’s unlike any boot camp this military town has seen.

Such education is not cheap. Boot camp programs of around 12 weeks cost five figures. But the prospect of a job on the other side is what gets students to pay.

Code-writing boot camps are proliferating nationally, and San Diego is following the trend. A few blocks east on Broadway, a second academy backed by a publicly traded company is set to open. And in the arts-oriented, youthful community of North Park, a third program is completing its first year.

Course Report, which offers an online directory of such programs, said it expects the North American market for coding boot camps to grow 238 percent this year, to more than 16,000 graduates.

A demand for programmers drives growth, but the boot camp space seems poised for another spurt: The federal government recently opened the door for Uncle Sam to pay tuition. In mid-October, the Department of Education announced that it would pay for some low-income students to go through coding boot camps as part of an experiment.Some on the Local Scene

• Dev Bootcamp, which is already established in three other cities and will start its San Diego course in November. The business is part of the test-preparation and higher education company

• Learn Academy on North Park’s Ray Street, a place better known for its art galleries. The boot camp is an offshoot of Notch8, a development house that specializes in the Ruby programming language. Chelsea and Rob Kaufman, both 33, are behind the business. Notch8 also works in Portland, Ore.

San Diegans have even more boot camp options if they want to make the short trip to Orange or Los Angeles counties, or if they consider programs from public universities. UC San Diego Extension, for example, says it offers multiple code-writing classes.

On a recent morning at Origin, guest speaker Nicholas Head of Oceanside-based HireAHelper.com, was speaking to a class of three men and three women about being ready for job interviews. Always have a work sample handy, “even if it is silly,” said Head, who is director of software engineering at his company. HireAHelper connects burly guys who can load or unload moving vans with people who need such services, has about 20 employees, and occasionally needs new developers.

Head also spoke enthusiastically of the need for continuing education. Personally, he said, he likes to read certain coding blogs (Scott Hanselman’s blog and Jeff Atwood’s “Coding Horror” are among his favorites) or listen to coding podcasts.

Students at Origin spend 9 a.m. to noon in a lecture, and then spend 1 p.m. to 5 p.m. in work space shared by the EvoNexus incubator and The Vine collective work space. Students work “back to back with actual developers writing code,” Winkler said.

Dev Bootcamp offers a 19-week course — nine weeks of remote work, nine weeks of classroom work and one week of career training — with a $12,700 price tag. In addition to technical topics, Dev Bootcamp representatives say they teach people to successfully work in teams, covering topics such as giving and receiving feedback, handling people with empathy and taking leadership when needed.

Local boot camps differ in their career-transition elements. Some offer internships while Origin goes as far as to promise job placement. (Caveats, Winkler said, are that students do their homework on time and only get to miss one class session. Jobs in the placement program pay about $40,000 per year, he added.)

Origin asks students to bring a rubber duck — like you might see in a bathtub — since its curriculum includes a session on “rubber duck debugging.” The phrase refers to a process of breaking down software code by explaining it, line by line, in terms that a coding novice might understand. The rubber duck takes the place of the other person.

The most common programming language taught at boot camps is Ruby, Winkler said, describing it as “super trendy.” Ruby is useful for anything that users must log into, such as social media and e-commerce sites, Chelsea Kaufman said. Winkler said he eventually decided to teach languages other than Ruby after surveying the needs of local chief technology officers.

Kevin Carroll, executive director of the nonprofit Software San Diego, is taking a wait-and-see approach to the new phenomenon of boot camps.

There is certainly a need to fill software jobs in San Diego, Carroll said, and the boot camp model has worked well in Silicon Valley.

However, the quality of camps is likely not uniform, and programs will stand and fall on the quality of the students they graduate, he said. “Word’s going to get around quick” about the skills of students getting out of certain programs.

Prospective students, meanwhile, will take a long look at the financial implications of attending a camp.

Many students take out loans to attend boot camps, and there are even specialized loan providers now. Dev Bootcamp — part of Florida-based Kaplan — has a partnership with Austin, Texas-based Skills Fund LLC. As of mid-October, Dev Bootcamp and Skills Fund were advertising a 36-month, fixed-rate loan of 5.99 percent and a 60-month loan of 7.99 percent.

The boot camp business has grown so big it now has a special website devoted to it. New York-based Course Report, which runs the site, found 6,740 people graduated from boot camps in 2014. Some 16,056 people are expected to graduate this year, the business said, based on self-reported information from 63 schools in the U.S. and Canada.

Kevin Solorio, who recently came to San Diego to start Dev Bootcamp here, said he is excited to be in the 707 Broadway building, which is home to other technology businesses.

Solorio said the city seemed like an appropriate place to expand. It’s the fourth market for Dev Bootcamp (after San Francisco, Chicago and New York) and larger competing programs are not yet in the city.

Dev Bootcamp will likely not be the last boot camp to find space and start classes in San Diego.

“The growth and potential here,” Solorio said, “is through the roof.”