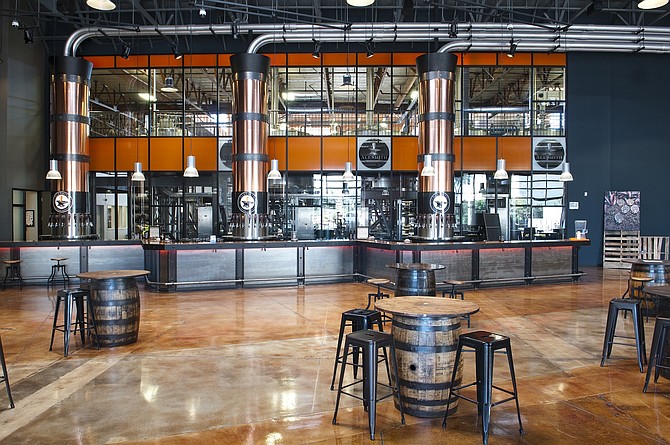 After more than a year of design and a $1.5 million renovation, company officials said AleSmith’s new facility is up and running in a leased space at 9990 AleSmith Court, formerly known as Empire Street. The indoor-outdoor space has 60 beer handles and features a zig-zagging bar with a trio of massive copper tap towers, and visitors get a view of a custom-built, two-story brew house behind glass panes frosted over with the company’s familiar anvil logo.

Operators said the new tasting room’s 5,000-square-foot outdoor beer garden has a fire pit and drought-resistant plants. The exterior space is bordered by a steel rail bar allowing access to food trucks and other on-site vendors of edible items.

The new tasting room was designed by Marcatects and Smith Consulting Architects, with R&R Construction as the general contractor and Urban CM Group as project manager.

Future phases, set for completion in 2016, will include a new beer garden bar, an upstairs mezzanine area, company store and private event space. Zien is also planning a museum honoring the late San Diego Padres Hall-of-Famer Tony Gwynn, being built in association with Gwynn’s family and the non-profit Tony and Alicia Gwynn Foundation.