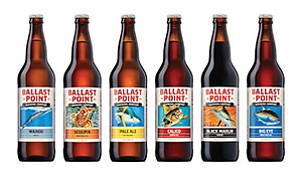 It would be the first of San Diego’s 100-plus craft brewers to become a publicly traded company, said Kevin Hopkins, president of the San Diego Brewers Guild.

The producer of Sculpin IPA and other craft beers filed its S-1 statement with securities regulators Oct. 19. The business hopes to raise up to $172.5 million.

Ballast Point, founded in 1992, reported having 375 employees as of April. The company owns a one-third interest in a subsidiary, Ballast Point Spirits LLC.

It eclipsed its 2014 results in the first half of 2015, when it reported net revenue of $51.7 million. Net income for the half was slightly less than $6 million.

The business said it plans to use proceeds from its IPO for working capital and general corporate purposes. Ballast Point has proposed a Nasdaq ticker symbol of PINT.

Ballast Point is moving toward an IPO under a recently promoted chairman and CEO. Jim Buechler, who had served as the company’s president and general manager since 2012 and took the top job in June from founder Jack White Jr., who had been CEO since the company’s inception in 1992. Yuseff Cherney is chief operating officer and head brewer.

The IPO comes five weeks after MillerCoors LLC announced plans to acquire Saint Archer Brewing Co., based in the Miramar area, for undisclosed terms. MillerCoors’ parent, SABMiller, is itself an acquisition target: Anheuser-Busch InBev wants to buy it.

“As clearly evidenced with a number of recent announcements, businesses can and will grow in a variety of ways,” Hopkins said. “Mergers, acquisitions, ESOPs (Employee Stock Ownership Programs) & IPOs are all natural progressions of successful enterprise and we applaud the strong growth and demand that leads to these happenings. It is part of the natural evolutionary flow and encourages some brands to continue their existing growth model, while also encouraging others to maintain a standard of smaller, independent growth on a more local basis.”