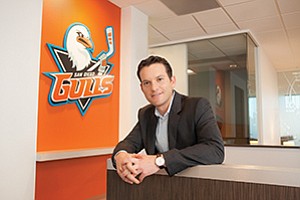 Ari Segal, the president of business operations for the San Diego Gulls, says the team’s games will  t that gap between the end of football and the beginning of baseball. For sports fans, the games come at a competitive price point versus other entertainment options. Photo by Melissa Jacobs.

San Diego — Seven minor league hockey teams have tried to make it in San Diego since 1944, none lasting much more than a decade and many folding as their leagues shut down.

So it may not immediately be clear why yet another team is reviving the San Diego Gulls name this year to bring professional hockey back to Valley View Casino Center, starting Oct. 10. But the shared name is one of the only things connecting the new Gulls to their ultimately unsuccessful predecessors.

The latest iteration is part of the

American Hockey League, the top source of rising players for the National Hockey League. Though past Gulls have been tied to NHL teams before, they were part of lower-tier leagues.

The Gulls are part of the Anaheim Ducks’ organization, after the Ducks decided to buy their AHL affiliate in January and move it from Norfolk, Va, to San Diego. The relocation is part of the AHL’s plan to create a Pacific Division in California, branching out from its traditional base on the East Coast and in the Midwest. Farm teams tied to the Los Angeles Kings, Calgary Flames, Edmonton Oilers and San Jose Sharks are all moving to the state for the upcoming season.

‘Beachhead for the Ducks’

“We’re not going into this to throw money away,” said Ari Segal, the Gulls’ president of business operations. “It’s a beachhead for the Ducks in Southern California. That’s in the background all the time. It can become a fan development engine.”

Ticket sales are far more important to AHL teams than their NHL counterparts because NHL teams can use their televised games to drive sponsorships. Gulls games won’t be on TV, so any company that wants their logo on the ice will only be paying to get their name in front of fans at the Valley View Casino Center.

So far, the Gulls have sold more than 2,800 full season tickets, about twice what they expected. The arena holds just shy of 13,000 for hockey games. The season tickets run from $340 for students and military to $2,210 for seats on the glass, while individual tickets cost between $18 and $60. About 1,400 fans already opted into a three-year commitment.

Segal said the presence of the Padres and Chargers will still leave room in fans’ budgets for Gulls games, especially because the October through April season falls mostly in between the end of football and start of baseball seasons.

Falling Into the Gap

“San Diego is a big sports town with a gap in the calendar we slot into,” he said. “It’s a bite-sized experience with a price point that competes with the movies.”

Despite the push for profitability, the Gulls switch from the independently-owned Norfolk Admirals to a part of the Ducks’ corporate structure may alleviate some bottom line pressures, according to David Carter, the executive director of the University of Southern California’s Sports Business Institute.

The Ducks are also expected to cut down on transportation costs calling players up from Virginia to replace injured starters. The Gulls will also play other members of the Pacific Division more frequently than other teams, creating a California travel circuit. The deals to move the five teams here took years of negotiations to finalize.

“They didn’t enter into this lightly,” said Carter, who is part of the LA Kings’ business advisory board. “It was heavily analyzed and discussed.”

He added: “Will there be business operations benefits and player personnel benefits? Those are critical. To the extent they can play an additional role of promoting hockey in a non-endemic region like Southern California, that’s great as well.”

The Gulls declined to comment on expense figures for the season, but Ducks General Manager Bob Murray said in February that the Admirals spent about $5 million last year for players’ salaries and travel. Free agents in the AHL earn at least $42,000 a year but can get far more if they sign a contract with an NHL team, he said.

The Gulls also pointed to intangible savings. Bleary-eyed players in Virginia would often get woken up in the middle of the night with news that they needed to be in Anaheim in less than 18 hours to play for the Ducks the next day. The seven-hour flight and lack of sleep weren’t ideal conditions to prep players for a major league debut, said Bob Ferguson, the Gulls’ general manager. The proximity to the Ducks will also better motivate players, he said.

“When a young player beginning his professional career knows he’s only a 90-minute car ride from playing in the major leagues, it’s going to be huge in terms of enduring the grind of a season,” Ferguson said. “You can’t really put a price on the benefits.”