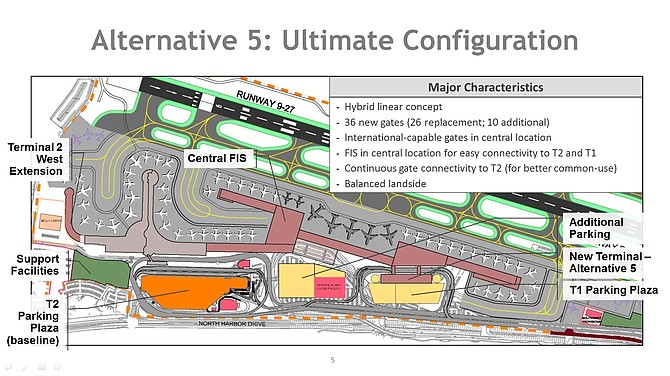 San Diego International Airport officials have chosen a design concept from among five alternatives for a planned $2.2 billion redevelopment and reconfiguration of the aging Terminal 1.

The executive board of the San Diego County Regional Airport Authority recently selected what is known by operators as “Alternative 5,” which officials said can be built in the shortest period of time because it minimizes and streamlines pre-construction preparation work.

An airport authority statement said the selected concept provides for a unified terminal design, and seamless connectivity to all terminals, amenities and passenger services, at the lowest potential construction cost. It also offers more room for critical infrastructure and parking if needed, with plans for a central federal inspection facility to serve growing international traffic.

The executive board also approved the start of the environmental review process for the airport development plan, expected to conclude in summer or fall of 2017.

The airport in 2013 completed a $1 billion renovation of Terminal 2 West. Officials said future improvements are being planned to enable the airport to meet rising demand for passenger services through 2035.

The Terminal 1 plan calls for building 36 gates – 26 replacement and 10 additional ones.