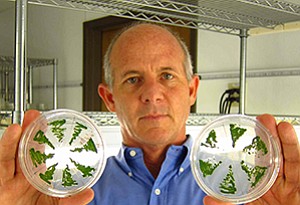 Steve Mayfield, founder of Sapphire Energy and the director of the California Center for Algae at UC, San Diego, said the value is in Omega-3 oils and certain proteins.

Let’s be honest, biofuel was a bit of a bust.

San Diego’s pioneering geneticist J. Craig Venter called it back in 2012 during an investor forum when he flatly declared biofuels dead.

“It doesn’t matter what the scientific breakthroughs are, there’s no way to beat oil,” he told the audience.

This was a somewhat unexpected — and disappointing — realization for the industry, especially here at home. San Diego is a mecca for biofuel research due to its high concentration of algae-based biotechs. Many of those companies are now diversifying or completely abandoning biofuel research in pursuit of profits and a sustainable business model.

“Rumors of the clean-tech demise are exaggerated, but I do think that the industry has shifted,” said Martin Sabarsky, CEO of algae firm Cellana Inc. “To the critics’ point, I think going after a rifle-shot approach — all biofuels all the time — is something that is increasingly difficult to do.”

That’s because biofuel, which burns renewable sources such as plant oil, cannot compete dollar for dollar with crude oil and its byproducts.

“Petroleum is an extremely low value commodity; it’s cheaper than milk,” Sabarsky said. “It’s really hard to get your costs down low enough to make a profit on that.”

Steve Mayfield, founder of Sapphire Energy and director of the California Center for Algae at the University of California, San Diego, said that the money is in nutrition. While oil from algae can be burned for fuel, the green goo also produces nutritional co-products such as Omega-3 oils and proteins. These products can be added to animal feed, human supplements and even baby formula.

These high-value co-products have attracted nearly every algae company in San Diego.

General Atomics, a mega defense contractor specializing in nuclear physics, recently conducted a cost analysis for the production of biofuel and found the financials wanting. A profitable biofuel business was not in the cards, so the company ditched its program entirely.

“In the end, it’s always about yield,” said John Parmentola, senior vice president of GA’s Energy and Advanced Concept Group. “At what price point can I make a buck? Unfortunately, it’s not there for algal oil.”

Instead, Parmentola said, the company found value in algae co-products. General Atomics is entering into a project to research the use of algae protein in fish meal.

General Atomics is not alone in its pursuit of high-value co-products. Sapphire Energy, once completely devoted to biofuel, is now developing “nutraceuticals” (a food said to have health-giving additives and medicinal benefits), along with animal and aquaculture feed. Cellana is also branching into animal feed, and was awarded a $3.5 million government grant last year to pursue Omega-3 oil research for human health.

Some in the industry believe this diversification is necessary for algae companies to stay alive.

“The pure plays for fuel weren’t working, and even the lead government agencies that are funding biofuel efforts have realized this,” Sabarsky said. “They’ve shifted their perspective and started grant options for multiple algae-based products.”

After all, a diverse product line is the reason crude oil is such a valuable commodity. Products made from oil are extremely diverse — ranging from gasoline, tires and industrial lubricants to cosmetics and Crayons.

“We need to maximize the barrel of algae like you maximize a barrel of oil,” Sabarsky said.

It’s possible that by leveraging a diverse product line, algae companies can develop the foundation and structure necessary to compete with big oil.

“You don’t have to choose between all high-value oils or all fuel,” Sabarsky said. “Doing both is a good way to get commercial volumes started. We have to assume as an industry that we must be competitively priced to survive — people won’t pay more just to be green.”

Parmentola, however, isn’t so sure that biofuel is the best way to “go green.”

“The thing about biofuels is that they need to compete with other sustainable options as well,” Parmentola said. “There is a lot of talk about electric cars and hydrogen technology. There are issues with each, but in my opinion, biofuels need a major scientific advancement to improve the economics. Someone may be able to genetically modify an algae organism to improve the yield of oil, and that might help tip the balance. But it would have to be a substantial increase to make it a competitive option.”