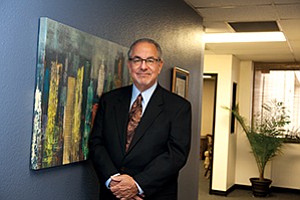 When Scott Silverman looked for a drug treatment facility after years of addiction, the demographics of his fellow patients was not a pressing concern.

But for first responders, especially police officers, the risk of running into someone they know in a waiting room or group session can prevent them from seeking help.

Silverman, who has been sober for 30 years, founded the nonprofit Second Chance in 1993 to help ex-convicts and others in need find jobs, mental health services and housing. His latest effort is called Confidential Recovery, an outpatient addiction treatment center that caters to doctors, lawyers, police, 911 operators and other professionals.

“Anyone can walk into any treatment center in San Diego,” Silverman said. “But sworn officers can’t, especially county-funded programs because those are where the arrestees are. So now, I’m helping the people that used to arrest my old clients.”

While therapists and psychologists are required to keep their sessions with patients private, first responders are often scared of being outed by fellow patients they may know or they may avoid therapy because they believe no one outside their field can understand the pressures they face, Silverman said.

Confidential Recovery offers one-on-one sessions around the clock to accommodate graveyard shifts and is located in the back of a nondescript industrial park so clients can avoid getting spotted walking into a treatment center. The company is hiring counselors who are former cops, lawyers and doctors. A 17-year police veteran is currently training to be a clinician for Confidential Recovery.

“We hope that when a patient says, ‘I’m a surgeon, you don’t understand my stressors,’ we can say, ‘Oh, we have an ex-anesthesiologist who’s now a marriage and family therapist and will be facilitating your group,’” Silverman said.

Silverman left Second Chance several years ago after a successful run, including recognition as a “CNN Hero,” but said he didn’t want to open Confidential Recovery as a nonprofit.

“I left nonprofits because I felt I could do more and I wanted to create systemic change,” he said. “It’s hard when you’re so dependent on your funding to create what your next program might look like.”

The company received state accreditation in October, accepts insurance and has a medical director, psychiatrist, psychologist, two chemical dependency clinicians and a family therapist. All of the medical staff are contractors, coming in for appointments several times a week and helping evaluate potential patients.

“A lot of people in the clinical world are solo practitioners and have a part-time practice, so they like the idea of spending 15 hours off-site on something like this,” Silverman said.

Silverman said he couldn’t estimate expected revenues because Confidential Recovery’s reimbursement rate as a new provider was uncertain. About 60 percent of the year’s income is a receivable, he said.

The six- to 10-week outpatient program costs between $6,000 and $18,000, based on need, and involves three-hour sessions three times a week. A two-year follow-up program costs around $1,000 per month. That includes one-on-one visits with a psychologist, group sessions and relapse prevention training.

The follow-up isn’t covered by insurance, but Silverman said it’s essential to Confidential Recovery’s success. At Second Chance, he learned that 95 percent of patients relapse if they do nothing else after a standard 28-day treatment program, but relapse rates fall by 75 percent if patients stay engaged for two years.

“That’s the secret sauce, that’s the business model,” Silverman said. “The follow-up is a separate cash fee because we want you to have skin in the game. When you join a club, if you’re paying $1,500 a month, will you show up? Probably. And if it’s free? When you can.”

The cost can seem prohibitive, but Silverman said he encourages patients to compare it to how much they spent on their addiction every month. He also voiced his criticism that addiction treatment is a $35 billion industry nationwide with a 95 percent “failure rate.”