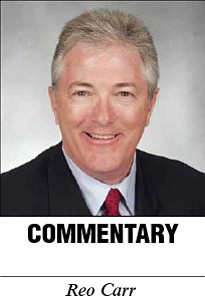 San Diego is home to an extensive community of engineering talent dedicated to designing, developing and building unmanned aerial vehicles (UAVs), or drones, for military and government applications.

General Atomics builds all variants of the Predator military UAVs in Poway. Northrop Grumman performs design and engineering work for their Global Hawk and Fire Scout UAVs at their facility in Rancho Bernardo.

For a number of years now, the Predator and its variants and the Global Hawk have been the leading tactical and strategic UAV programs for the U.S. military.

The U.S. Border Patrol deploys a version of the Predator to stand watch over the U.S.-Mexico border.

As often happens, military technology finds its way into civilian applications. Drones are the most recent example of this.

Perhaps nothing is more emblematic of the formal arrival of drones in our civilian lives than two recent events.

First, earlier this year, the Federal Aviation Administration (FAA) announced the first formal regulations of drones flying in civilian airspace. The rules are simple and straightforward: operators of drones must pass a basic knowledge test administered by the FAA (no pilot license is required as some had feared); and drones must be registered with the FAA and weigh no more than 55 pounds. In flight, drones must stay within 500 feet of ground level, fly no faster than 100 mph and always be within line of sight of the drone operator or observer. Drones may not be flown over people (with the exception of the operator and/or observer).

The line of sight regulation means your local pizza restaurant will not be delivering pizza by drone anytime soon, much to the disappointment of those who have been anticipating the delivery of all manner of things – from books to small electronic gadgets to take-out food – by drone.

However restrictive some may feel the FAA rules to be, the commercial drone industry was largely pleased as the rules allow drones to be used for everything from aerial surveying to pipeline inspections to real estate photography and much more.

Which brings me to the second noteworthy event of late related to drones. Shortly after the FAA announcement governing drones, Qualcomm Ventures led a Series C investment round in the amount of $50 million in 3D Robotics, a designer and manufacturer of drones. Headquartered in Berkeley, 3D Robotics has engineering facilities in San Diego and the company manufactures drones in Tijuana.

Clearly, Qualcomm and its fellow investors want in on the drone business. Reports are that the 3D Robots Series C round was oversubscribed.

Although drone technology with its inherent ability to intrude on our privacy is controversial, the FAA’s rulemaking and Qualcomm Ventures’ investment in companies such as 3D Robotics suggest drones are here to stay.

The modern drone doesn’t look like a traditional aircraft with a fuselage, wings, and a tail.

No, today’s drones are quadcopters or multicopters. They sport three, four or sometimes as many as eight rotors, providing both lift and directional thrust similar to a helicopter.

But that’s not what makes drones so compelling. It is what they can do and how easily they can do it: autonomous preprogrammed flight; virtually silent flight (most of today’s drones are powered by batteries and electric motors); fast flight (up to 100 mph); and, the killer app, drones equipped with on-board video cameras capable of streaming video in-flight to a nearby smartphone or tablet.

Reo Carr is Executive Editor of the San Diego Business Journal. He can be reached via rcarr@sdbj.com.