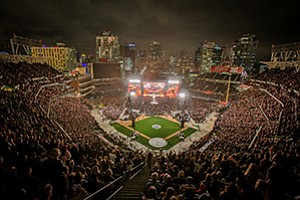 The Rolling Stones kicked off their latest tour at Petco Park in May, drawing a crowd of more than 40,000. Taylor Swift is the next mega-act for the park, due to perform in August. Photo by John Audley/BeWaterPhoto

Sold-out concerts by the Rolling Stones and Paul McCartney, along with the addition of Supercross and Monster Jam shows, are buoying Petco Park’s status as a premier venue and putting the Padres on track this year to collect record special-events revenues.

Petco’s special events are projected to generate nearly $3.1 million in annual net revenue for the Padres and San Diego by the end of June, a far cry from the less than $160,000 collected in 2010. The improvement is due to an aggressive focus on blockbuster concerts, including the upcoming Taylor Swift show in August, and a change to the Padres’ revenue-sharing agreement with the city.

On the heels of $5 million in capital improvements to add new restaurants and a high-definition video board, the Padres are expanding Petco’s nonbaseball offerings, including its first basketball game in December. For the first time since at least 2012, the net revenue generated by Petco’s special events is expected to surpass the revenue from Qualcomm Stadium, the Mission Valley home of the San Diego Chargers.

“The pitch of Petco Park was always that it was more than a ballpark,” Padres CEO Mike Dee said. “It was a facility that, given the climate here, was going to be used more than 81 days a year for baseball. That vision took a few years to get aligned, but it’s finally coming to fruition.”

No sports stadium can fill most of its calendar with home team games, with owners turning to college sports, concerts and even bar mitzvahs to earn additional revenue. But baseball stadiums historically have a harder time finding other events, given their relatively small size, an off-season in the middle of winter and more complicated dimensions. Baseball parks also can’t compete with multipurpose football stadiums and convention centers for events such as the NCAA Final Four, which draws upwards of 70,000 fans per game. Petco Park has a capacity of 42,000 seats.

“Baseball stadiums are a lot more intricate,” said David DeBoskey, an associate professor at San Diego State University’s Lamden School of Accountancy and the university’s sports MBA program. “The geometry is very different. It would be a lot simpler in a football stadium to tear things up and put them together.”

Bolstered by San Diego’s mild climate, the Padres have had success attracting winter shows. Supercross and Monster Jam debuted at Petco in January and February, and will return to the ballpark in downtown San Diego’s East Village next year. Both events were held at Qualcomm for years, but said they wouldn’t return to the aging football stadium. San Diego State University and the University of San Diego’s basketball teams will also face off this winter on an outdoor court on the infield.

“We’re starting with two local schools with an exciting rivalry,” Dee said, adding future games with other teams are possible. “It’s a sure sell out.”

The Padres, however, struggled several years ago to post strong special events results. The Padres did not disclose overall revenue from special events, but the city’s portion dropped from $1.4 million in the year ending in June 2009 to $46,000 the following year. The Padres also lost money on a November 2010 concert series with a smaller venue built inside the park, featuring John Legend, Macy Gray and Colbie Caillat.

It Didn’t Pay to Play

By 2011, most downtown businesses said they were suffering during the offseason. They claimed the Padres should get a greater share of special event revenue to spur an increased focus on nonbaseball activities year-round. San Diego initially took 30 percent of net revenue for special events during the baseball season, but 70 percent during the winter offseason, leaving slim margins for the Padres, which were responsible for any event costs. The initial agreement was based on the city’s 70 percent ownership of the stadium.

“The agreement made logical sense, but practically speaking it just didn’t work,” Downtown San Diego Partnership CEO Kris Michell said. “The split did not incentivize the Padres to do anything, because they could either lose money or break even.”

Michell is a former Padres vice president for government relations and led the campaign for Petco more than a decade ago. Once again advocating on behalf of the Padres, she helped push the City Council to reverse the revenue-sharing agreement in May 2012, giving the Padres 70 percent of earnings for all concerts and other events. Businesses saw almost immediate improvement, Michell said.

“It brought certainty to the sales process,” Dee said.

While sold-out concerts remain the most lucrative events, with Paul McCartney’s show last year generating about $1.4 million in net revenue for the city and the team, the Padres can still rack up significant earnings from those smaller events. Petco charges at least $25,000 to host school dances, $35,000 to rent out the field and $50,000 for a fantasy baseball package.

“We weren’t doing the basic blocking and tackling to pursue the smaller events, like corporate dinners,” Dee said.

The special event growth continues to accelerate, according to the Padres. The team said it has held 110 public and private events at Petco since November 2014, compared with 130 for the entire year after November 2013.

But the gains in special-events revenue are not without cost. Almost a week after the Rolling Stones show last month, the grass in Petco’s outfield was still brown, tracing an outline of the concert stage. Dee called the grass “safe, but aesthetically poor,” explaining that the weight of the stage and cranes driving over the grass damaged the turf despite protective coverings. Even a spilled glass of red wine can kill grass and create brown spots.

“We have to be mindful that our core business is baseball,” Dee said. “It’s a battle to make sure you’re doing everything you can to preserve the playing field.”