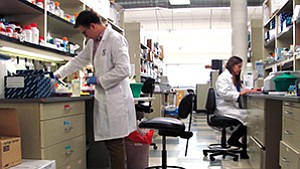 A lab technician conducts tests at OncoSec, a biotech that is working to increase the effectiveness of immunotherapy, which is a way to treat illness by stimulating the body’s own immune system. Photo by OncoSec Medical Inc.

OncoSec Medical Inc., a public biotech company that’s operated largely under the radar in San Diego, has uplisted to the Nasdaq in a move to attract investors with more weight.

The company was previously listed on the over-the-counter market, an exchange that hasn’t earned the same credibility as major players on Wall Street such as the New York Stock Exchange and Nasdaq. OTC stocks, often called penny stocks or pink sheets, have a reputation for being risky. And OncoSec wants to up its game.

“While we’ve experienced a lot of growth over the last year, we haven’t been able to get recognition on the marketplace because trading on OTC limits your investors,” said OncoSec’s co-founder and CEO Punit Dhillon. “Being on the Nasdaq heightens our credibility and broadens our base of institutional investors.”

The company held a 1-for-20 reverse stock split in May to prepare for the uplisting, which increased OncoSec’s share price to about $6 per share from pennies and dimes. Note that the reverse stock split doesn’t actually up the company’s value, but reduces the number of shares outstanding.

For a biotech, OncoSec has grown quite rapidly over the last year. Its employee base more than doubled from 24 in January 2014 to 55 employees today.

Since its inception in 2011, Dhillon, 34, has grown the company from a $20 million market cap value to nearly $74 million, and raised $74 million in working capital for the company to date. Today, OncoSec has a cash runway of almost two years, and multiple clinical programs to keep it busy.

Still, OncoSec has found it difficult to climb the charts. The company’s stock has declined about 35 percent over the year, and in early May the company recorded a new 52-week low, with its stock trading at $0.26 per share.

Dhillon said the lack of traction was primarily due to the market in which the company was trading.

“True valuation is never reflected until we get an exit opportunity,” Dhillon said. “Everything in-between is just noise.”

While OncoSec has struggled to receive recognition in the marketplace, new developments in cancer research indicate the company might be on the right track for a lucrative breakthrough therapy.

OncoSec’s main game is to increase the effectiveness of immunotherapy, which is a way to treat illness by stimulating the body’s own immune system.

Findings presented at the American Association of Cancer Research conference in April recognized immunotherapy’s effectiveness in treating cancer, and projected that it would be the standard of care in the near future. Science magazine also announced in the same month that immune checkpoint therapy had joined the ranks of surgery, radiation and chemotherapy as a pillar of cancer treatment.

“No matter how successful the immunotherapy approach may be, if the vast majority of patients aren’t responding then it’s likely that health insurance companies will not want to pay for the drug,” Dhillon said.

Now here’s the cool part. ImmunoPulse uses electricity to zap cancer cells, causing tiny pores to briefly appear in the cell membranes. This “electroporation” allows drugs or compounds to be delivered directly to a tumor site, which then activates a systemic response throughout the entire body. If the compound delivered through this system is a protein called interleukin 12, it will kick up the presence of T-cells at all tumor sites, Dhillon said.

With the soldier cells in place, the anti-PD-1 therapy could be significantly more effective.

This is why the University of California, San Francisco has entered into a collaboration with OncoSec to test how the company’s technology combines interleukin 12 with anti-PD-1 therapies. OncoSec has even attracted the attention of pharma giant Merck & Co., which provided its anti-PD-1 drug Keytruda at no cost to the San Diego biotech for its clinical trials.

If the Phase 2 trial testing the combination in melanoma goes well, OncoSec could soon be primed for a successful exit.

Bristol Myers Squibb Co., Merck, Roche Holding AG and other drug makers are racing for a share of the burgeoning cancer immunotherapy market, which some analysts predict could reach $20 billion to $30 billion in annual sales in the next decade.

“We want to give the immune system a bit of a nudge,” Dhillon said. “Like plugging in a USB stick and retraining the defense system. We want to treat any type of tumor, even the hard to reach ones.”