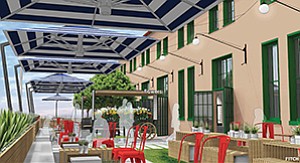 Most of the food purveyors announced so far for the upcoming new Liberty Public Market in Point Loma are unknown to many people in San Diego County and elsewhere, and the project’s chief developer says that’s by design.

Many of the 10 locally based vendors announced so far — with more on the way — have a retail presence in just one or two San Diego neighborhoods, while others have no brick-and-mortar stores but a loyal following garnered through the food-truck circuit.

“We wanted to emphasize local, and we wanted to have a combination of places that you weren’t going to find somewhere else,” Spatafore said, during a recent gathering announcing the market’s first tenants.

Spatafore estimated that renovation of the space by Blue Bridge, its partners and vendors will likely total between $3 million and $5 million by the time the market is up and running. The location is a space at 2816 Historic Decatur Road, next-door to Stone Brewing World Bistro & Gardens.

Blue Bridge is partnering on the public market with Liberty Station’s master developer, Corky McMillin Cos. It is among several new attractions expected to arrive this year at the mixed-use development, including movie theaters, restaurants and a public ice-skating rink.

San Diego Ranks Fourth Among Biotech Clusters: San Diego slipped a spot from a year ago, to No. 4, but still ranked among the top 10 U.S. life science clusters in the latest annual outlook report by commercial brokerage company JLL.

The top three markets in this year’s ranking were Boston, Raleigh-Durham, N.C., and San Francisco. Intended as a guide to prospective property investors and tenants in the life sciences industry, the report ranks markets based on factors including labor and real estate costs, talent availability, user demand and the performance of various industry sub-sectors.

JLL researchers said San Diego continues to excel in genomics and remains a vibrant research and development headquarters for several major pharmaceutical companies, primarily because of the depth of the area’s talent pool.

San Diego currently has approximately 1 million square feet of life science tenant demand, JLL reported, and that strong desire for space is giving rise to some new construction and continued conversion of older buildings to life-science uses. That’s despite the often high cost of converting a standard office or industrial building for use as biotech lab or production space.

Mergers and acquisitions continue to reshape the biopharmaceutical sector, but that doesn’t necessarily lead to players downsizing operations. A case in point: Drugmaker Eli Lilly and Co.’s recent announcement that it plans to expand its existing Lilly Biotechnology Center in University Towne Center by 175,000 square feet.

Company officials said the expansion, set to be completed in 2016, will effectively double Eli Lilly’s research presence in San Diego, generating up to 130 new jobs.

Spec Development on Tap for Beer: With more than 100 craft beer brewers in San Diego County, and more on the way, production space is running low in key hubs including Vista. That helps explain the strategy recently announced by Solana Beach-based investment firm SR Commercial, which plans to build out speculative brewery space at its recently acquired Shadowridge Business Center in Vista.

SR Commercial did not disclose the purchase price of the four-building property at 1930 and 1960 Watson Way, and 2025 and 2055 Thibodo Road. According to CoStar Group and public data, SR acquired the business park for $10.1 million from MetLife Insurance Co. USA, in a deal brokered by Louay Alsadek and Barbara Emmons of CBRE Group Inc.

“We’ve seen incubator space built out for other industries in San Diego, such as biotech,” said SR Commercial Principal and co-founder Adam Robinson, in a statement. “However, we believe we are one of the first to implement this strategy in the brewery space.”

Robinson said many small local brewers would like to open but are unable to afford the necessary equipment, so there may be opportunities for those smaller players to work together via clustering. Shadowridge is already home to Vista-based Mother Earth Brew Co., and SR Commercial is betting that more brewers will want to locate there.

Retail and Restaurant Arrivals: Two national sellers of active apparel and related accessories are among the newest tenants at Carlsbad Premium Outlets, owned by Simon Property Group. ASICS recently opened a 3,000-square-foot store, and Under Armour will join the center in September with a 10,000-square-foot venue, mall operators said.

Owner Taylor Kim and Executive Chef Daniel Barron planned a July 30 debut for Blush Ice Bar + East-West Kitchen, at the corner of Sixth Avenue and Market Street in the Gaslamp Quarter. Operators said the 7,500-square-foot space features craft cocktails among offerings in its 40-seat main bar, with sushi and other seafood served at an 18-seat raw bar and oyster lounge.