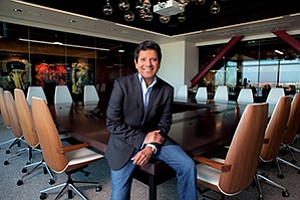 In one of the largest sales of a San Diego biotech to date, New Jersey-based drug maker Celgene has agreed to purchase Receptos Inc. for $7.2 billion.

Experts say the infusion of cash and reshuffling of talent could result in a new crop of startups in San Diego.The current bidder, Celgene, has grown to be one of the most successful biotechnology companies in the country, based largely on its blockbuster cancer drug, Revlimid. But Revlimid will eventually lose patent protection, and the company has been aggressively looking to expand its business and diversify.

If the deal goes through, Celgene will gain Receptos’ much-anticipated drug that experts say could yield a number of possible applications.

The drug, Ozanimod, is now in late-stage clinical trials as a treatment for multiple sclerosis and ulcerative colitis, with an approval possible for MS as early as 2018. Celgene has estimated that Ozanimod could bring in as much as $6 billion in annual sales.

The drug has helped propel Receptos into the international limelight, boosting the company’s valuation into the billions since its initial public offering in 2013.

Receptos, founded in 2009, first attracted global attention late last year when positive trial data boosted stock 41 percent overnight from $67 per share to $96. The stock has climbed steadily ever since, selling for $207 per share just before the acquisition announcement.

Celgene agreed to pay $232 per share for Receptos, valuing the deal at $7.2 billion, excluding Receptos’ cash on hand. That’s larger than all but a few local biotech purchases, the biggest of which was the $13.6 billion purchase of Carlsbad’s Life Technologies by Thermo Fisher Scientific in 2014.

Receptos’ stock was a favorite of Jim Cramer, the TV personality of CNBC’s Mad Money and founder of the stock watch website TheStreet. Cramer rained compliments on social media following the announcement.

“Receptos did it… So proud of them!” Cramer tweeted Tuesday. “And the market will love Celgene, too. That’s how good Receptos is. $232! Wowza! I know I’ve been pushing this one endlessly. Thank you Faheem Hasnain!”

Receptos’ CEO Hasnain is highly regarded in the industry, and appeared on Cramer’s show on more than one occasion. Before Receptos, Hasnain led Facet Biotech, which sold for $450 million cash to Abbott Laboratories in March 2010. Before that, Hasnain served in executive roles at Biogen Idec Inc., Bristol Myers Squibb and GlaxoSmithKline.

It is not known whether Hasnain will remain at Receptos following the acquisition, but some industry experts are doubtful considering the actions that typically follow a takeover.

“The management are normally let go with good packages, and they make a lot of money through stock options and warrants,” said David Diamond, a CPA and business consultant at Mayer Hoffman McCann P.C. who specializes in the life science industry.

And Hasnain’s cut would be no small prize. The top executive could potentially bring home $63 million if he’s terminated in a golden parachute package that includes $56 million in equity and a cash severance of about $1.6 million, according to Receptos’ proxy statement and data compiled by Bloomberg.

“A lot of these guys will start up new companies with the cash that comes in from big deals like this,” Diamond said.

“When companies like Receptos get acquired, there is an infusion of cash to the founders, investors and company executives, who then go out and reinvest the cash into developing new innovations in the region,” Panetta said in an email. “Additionally, the talent pool from a company that is acquired takes their very valuable expertise onto new ventures, cross-pollinating and sharing their experiences with other teams.”

Receptos has 68 employees, 51 of whom are involved in research and development operations. Considering Celgene already has a facility with R&D operations in San Diego, it seems plausible that the company may choose to consolidate.

Catherine Cantone, a spokesperson for Celgene, said the company is interested in keeping Receptos employees, but it’s not clear how many will be retained.

Receptos whose headquarters sports ping pong tables and weekly shuffleboard tournaments gained a reputation for being a fun and inspiring place to work. The R&D team appeared to have enthusiastically “bought in” back in March when San Diego Business Journal toured the facility.

As Hasnain led a touring group around the laboratory, a photographer noticed a piece of hand-scratched graffiti tucked amidst beakers and boxes.

“What’s this?” Hasnain asked the scientists, pulling down the piece of graffiti from a shelf.

Sloppy text scrawled on Styrofoam read, “Hold onto your stock!”

“That’s our motivation,” the scientist replied.

“People who got in early on the stock may never have to work again,” Diamond said. “At least, they won’t have to work with the amount of money they made, but many of them will. There’s a big shortage of people like them, and they will get jobs quickly. They’re probably getting calls already.”

That, Panetta said, is the beauty of San Diego’s life science economy.

“If it weren’t for the ongoing reinvestment of people like that in our community, we wouldn’t have had a Receptos in the first place,” Panetta said. “This natural lifecycle of companies in our region is just one of many reasons that San Diego continues to be one of the most successful biotech clusters in the world.”