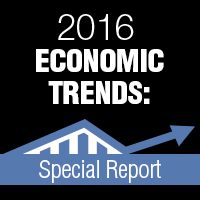 San Diego — As international trade partners struggled with recession and consumer spending growth slowed, forecasters warned that the U.S. economy was losing momentum in the second half of 2015 and could close out the year weaker than expected. While the economy was still growing, they said, sluggish global demand was slowing that growth and pushing down corporate revenue.

San Diego has not been immune to those pressures, though economists say the region will fare better than the rest of the state. The region’s gross domestic product, the total value of the goods and services produced here, was projected to rise 3 percent in 2015, but instead grew only 2 percent to $213.7 billion, according to a National University System Institute for Policy Research estimate. The economy is on track to grow 1.9 percent this year, to $221.1 billion.

Many of the forces lowering local expectations are beyond the control of local companies or governments. An analysis of state trade by research and consulting firm Beacon Economics last month said California’s exports were disappointing in the third quarter in part due to slowing economies in Canada, China and Japan.

Even though the firm said it expected trade to pick up this winter, its optimism was “tempered, however, by an uncommonly large flock of black swans on the horizon.” Beacon pointed to the surge of refugees entering Europe, terrorist activity abroad and a looming military standoff with China. Beacon founding partner Chris

Thornberg said that language may have been hyperbolic, but there was still a “frustrating slowness” in the economy.

“There’s no doubt the global economy is struggling right now, but it’s largely because we’re on the other end of this commodity boom, which is now a bust,” Thornberg said. “We haven’t gotten to that higher rate of growth because there’s always something: the government shutdown, slowdown in China, problems in Europe.”

Maintaining roughly 2 percent growth would still be a positive outcome for the region. According to a separate Beacon report, San Diego made an outsized contribution to California’s growth in the third quarter and its labor market is expected to improve for at least the next few years. Thornberg praised San Diego’s research and technology companies, saying they are poised to help continue the region’s growth.

“These are the parts of the economy that are really ticking forward,” he said. “If anyone’s going to be punching above its weight, it’s going to be San Diego.”

Marney Cox, chief economist for the San Diego Association of Governments, expressed some more caution about the economy, noting that despite job gains of about 40,000, 2015 saw an increase of only 3 percent in retail sales. The strong dollar cut down on Mexicans crossing the border to buy goods in San Diego, he said, and some of the people getting those new jobs commute south from Riverside County.

When gas prices fell, consumers were also expected to spend that money elsewhere, but many instead paid down debt or increased savings, which Cox said was directly related to an overall uncertainty many feel about the economy. Nonetheless, Cox predicted 1.5 percent to 2.5 percent growth this year due to San Diego’s diversification between stable industries, such as defense, and more dynamic ones, such as biotech.

“This is San Diego’s strength all along,” Cox said. “We have a pretty broad diversity in our job side and that helps us to prevent huge downturns. But there’s probably not runaway growth on the upside either.”

Another reason for the lower growth could be that the country is approaching full employment, according to University of California, Los Angeles Anderson Forecast senior economist

“We’re not anticipating a slowdown in California economic growth, except for the fact that we’re getting closer and closer to full employment,” Nickelsburg said. “As the economy grows at a slower rate, you’ll get consumption growth at a slower rate.”

Full employment can also bring wage increases as companies struggle to find available talent or those willing to leave their current position. Lower-end pay is already set to rise this month as California’s $10 minimum wage takes effect, replacing a $9 per hour standard.

But the march toward full employment could be complicated by a fairly low labor participation rate, according to San Diego State University finance professor David Ely. The unemployment rate only considers those who are actively looking for a job. The national labor participation rate was 62.5 percent in November, the most recent data available, only slightly better than the 62.4 percent the month before, which was the lowest rate since 1977.

Other economic indicators also point to an economy still working to return to pre-recession levels. According to a Congressional Budget Office estimate of potential GDP, a measure of the economy in a world with ideal employment, the country’s economic output fell 7.4 percent below potential GDP at the tail-end of the recession in mid-2009. Five years later, the U.S. was still 5 percent below that potential.

The business community remains cautious about 2016. The San Diego Regional Chamber of Commerce’s business optimism index has fallen for five straight months. Nearly 20 percent of businesses believed conditions in their industry will worsen in the near future.

Last year’s Qualcomm Inc. layoffs contributed to that confidence slump, according to Manpower San Diego CEO Phil Blair. Manpower clients are taking longer to make hiring decisions, in part by having applicants interview with more staffers inside their companies.

“Everybody in San Diego thought it (Qualcomm) was just a machine, there was no stopping: it was renting more space, hiring more people, giving more benefits,” said Blair, whose largest customer is Qualcomm. “When it has a realignment, everybody goes like, whoa, should I hunker down a little bit?”

Business optimism may also be tempered by global unrest. Terrorist attacks have prompted fears about European security. An estimated one million migrants and refugees entered Europe last year, many escaping conflicts in Syria, Iraq and Afghanistan. But a silver lining for San Diego is that people planning a trip abroad may instead decide on a domestic vacation. That could further boost San Diego’s tourism industry, which saw an estimated 34.2 billion visitors in 2015.

“Because the world is a more dangerous place, you’d expect more Americans to vacation in the U.S. instead of Europe, and California is a great place to vacation,” Nickelsburg said.