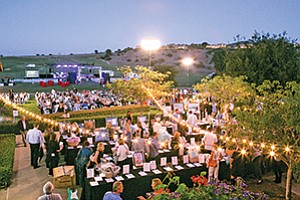 The Concert for the Kids to raise funds for the Hospital Infantil de las Californias was attended by more than 800 people. Foundation for the Children of the Californias

San Diego — The Foundation for the Children of the Californias announced that the Concert for the Kids, held at Santaluz, raised more than $665,000. Headlined by the Doobie Brothers, there were more than 800 people in attendance for the fundraiser. The proceeds will go toward a modern electronic monitoring and record system for Hospital Infantil de las Californias. Longtime San Diego supporter and philanthropist Becky Moores matched $250,000 of the funds raised. Additional sponsors were the Paul & Naoko Noble Charitable Trust, The San Diego Foundation, Cushman & Wakefield, SportFishing Association of California, SDG&E, Jennifer and Jay Levitt, Hasty and Mark Pidgeon, Nicole Peterson, Gloria Shepard, Jeff and Kathy Lysaught, KPBS, Adam Campbell Co., Land Rover San Diego, The Milagro, T-Mobile, Audi San Diego and Qualcomm Inc.

The 86th Scripps Candlelight Ball raised $1.8 million for the new Barbey Family Emergency and Trauma Center. The funds raised will more than double the size of the current emergency and trauma facilities, which treats more than 30,000 patients each year. The center opens in the fall of 2016 in the Prebys Cardiovascular Institute at Scripps Memorial Hospital La Jolla. John, Nonnie and Suzy Barbey were among the honored guests at the Fairmont Grand Del Mar, along with Dr. A. Brent Eastman, former Scripps chief medical officer and surgeon, and his wife Sarita. A campaign is underway to name the trauma area in the new Barbey Emergency and Trauma Center in Dr. Brent Eastman’s honor.

More than 200 people participated in the NAIOP San Diego annual NAIOPalooza event to raise $10,000 for HomeAid San Diego. The multi-event, team-oriented competition provided funds toward renovations at a building in Escondido to house the Interfaith Community Service’s Hawthorne Veteran and Family Resource Center. The center provides treatment for veterans recovering from surgery that requires 90 days to six months of care. Interfaith is one of only five agencies in the country certified by the Veterans Administration to provide this level of care. A long-time anonymous supporter of Interfaith purchased and donated the vacant medical office building. In addition to NAIOP’s financial contribution, numerous companies donated approximately $1.2 million in labor and materials to complete the 30-bed project. San Diego-based Johnson & Jennings General Contracting served as construction manager.

The La Jolla Institute for Allergy and Immunology has received a $1 million gift from Rancho Santa Fe residents John Major, chairman of the institute’s board of directors, and his wife, Susan, marking a milestone in the institute’s fundraising efforts. The gift will support the merging of precision medicine and immunotherapy.

Feeding America San Diego announced that Al Brislain was named its new CEO. Brislain has more than 35 years of experience in hunger relief, most recently as president and CEO of Harry Chapin Food Bank of Southwest Florida. He has served as director of four food banks and in leadership roles at Feeding America. Brislain is the recipient of the John van Hengel Fellowship Award from Feeding America; he also helped pass the Good Samaritan Food Donation Act and was instrumental in shifting Feeding America’s network of food banks to an auction-based food allocation system.

In honor of the giving season, North Island Credit Union announced a $10,000 donation to Safe Families for Children, a new local program. The program was created to help families experiencing a temporary crisis by providing safe homes, counseling, and education. Designed to extend and strengthen the community safety net for at-risk families, Safe Families is a positive alternative to the state child welfare system, allowing parents to work out their problems without having to worry about losing custody of their children. The program’s goal is to reunite children with their biological parent(s) in a home that is more stable and healthy. North Island CEO Steve O’Connell said his company wants to help at-risk youth and families to become healthy, productive citizens and to help “break the cycle of child abuse.”