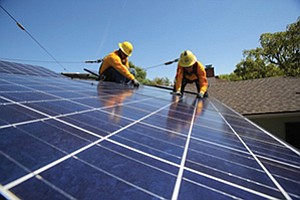 Industry leaders say there will be continued opportunity for solar in 2016. Photo courtesy of Sullivan Solar Power

San Diego — Last year, headlines across the nation proclaimed that clean-tech — despite all the hype and bluster — was dead.

Not so fast, says venture capitalist Rob Day, who pointed out that the sector is far too varied for someone to be writing its obituary.

“The ‘sector’ is really just a loose collection of very different markets and technologies, bundled together under a convenient label,” Day said.

Clean technology can include recycling, renewable energy (wind power, solar power, biomass, hydropower, biofuels, etc.), information technology, green transportation, and electric motors, to name a few. And when broken out into distinct categories, industry reports make it clear that not all clean-tech is dead. In fact, some sectors are thriving.

Industry reports indicate that solar, wind and water technologies have been experiencing significant gains over the last decade, led in part by recent attention from major corporate buyers such as Google, Apple and Dow Chemical.

According to Greentech Media, U.S. solar installations grew at a compound annual growth rate of over 60 percent from 2009 to 2014; the industry is now 108 times larger than it was a decade ago. The market for efficient lighting is expected by some analysts to grow to over $50 billion in 2015. Electric vehicle sales, led by Tesla, are booming.

San Diego also reportedly raked in $886 million in venture capital for clean-tech projects over the last three years, according to a 2015 San Diego Clean-Tech Landscape report. Jason Anderson, president and CEO of industry group Cleantech San Diego, says this is an indication that the clean-tech scene is still alive and well. Solar, water technologies and transportation represented significant funding opportunities, according to the report, but the biofuels/biochemical sector took the lion’s share, raking in 37 percent of the cash.

It’s likely that much of this cash is sinking into biochemicals rather than biofuels, experts say. While the city’s biofuel research and development scene is still thriving in academic settings, the commercial viability of biofuel has been a bit of a letdown for the region.

Last year, the San Diego Business Journal reported that several local clean-tech firms had more or less abandoned hope for a commercially viable alternative to petroleum — at least in the next decade. Instead, companies in the sector have shifted their focus to high-value oils and animal feed products, both of which have a much higher return on investment.

“In the end, it’s always about yield,” said John Parmentola, senior vice president of General Atomics’ Energy and Advanced Concept Group, in an interview last year. “At what price point can I make a buck? Unfortunately, it’s not there for algal oil.”

Anderson added: “A lot of these companies have pivoted to some degree. Many are working high-yield oils for nutriceuticals and other products. Right now, yes, biofuel is sort of on the backburner until it can get competitive with petroleum. There’s still a lot of work to be done.”

Tristan Grimbert, president and CEO of EDF Renewable Energy: “Environmental consciousness is growing. Clean-tech will touch everything at some point, because everything we do will have to be clean within 20 years if we want to survive.”

Anderson, of Cleantech San Diego: “There will be a lot of opportunity in energy efficiency and energy storage in 2016, as well as continued opportunity in solar. There’s also a lot of activity in energy management software, which has a lot to do with the ‘Internet of Things’ and Big Data.”