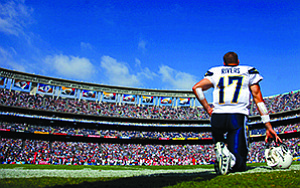 Chargers Quarterback Philip Rivers may have played his last game in San Diego. The team’s owners are awaiting a decision from the NFL on its plans to relocate to the Los Angeles area. Photo courtesy of San Diego Chargers

San Diego — Forecasting the future of San Diego’s sports industry is a tall order before NFL owners meet later this month to debate which teams, if any, will move to Los Angeles.

If the San Diego Chargers leave after nearly 55 years, the economic damage might not be too severe, though the city’s reputation would take a hit. Though far from a determinative factor, companies recruiting outside talent say people do consider whether the city has an NFL team when deciding whether to come to San Diego, said San Diego Regional Chamber of Commerce COO Aimee Faucett. Locals would also internalize the loss, said Faucett, who served on the Citizens Stadium Advisory Group.

“From a civic pride standpoint, a good portion of the residents will be going through the mourning process,” she said.

Even though Forbes pegs the team’s revenue at $304 million, economists have said professional teams relocating don’t have a significant impact on employment or spending for the spurned city. The fans who flock to Qualcomm Stadium will spend a fair amount of their money on other local leisure activates in town, and some researchers have compared the loss of the Chargers to a moderately-sized department store shutting down.

“In terms of overall impact on the economy, I really think it’s minimal,” said Jim Lackritz, co-founder of San Diego State University’s sports business MBA program. “The amount of money the Chargers generate is substantial, but when you compare it to golf club manufacturers, it’s not as big as one would think.”

A National University System Institute for Policy Research study found golf equipment manufacturing generated $1.9 billion in revenue in 2008. Though employment has fallen by about 20 percent since then, sales fell only 7 percent between 2010 and 2013.

But in terms of professional sports, the Chargers are still the biggest game in town. According to Lackritz, broadcast revenue for an NFL team is about $220 million per year, compared with an estimated $100 million per year for the San Diego Padres. The Padres have found success this year increasing revenue from nonbaseball events, including blockbuster concerts from Taylor Swift and the Rolling Stones. But many of the sports-related events, such as Supercross and Monster Truck shows, were already held in Qualcomm.

While there may not be much economic downside for the Chargers leaving, the proposed $1.1 billion stadium aimed at keeping the Chargers here would be a morale boost for the region’s sports community, Lackritz said. Working out a new stadium deal for Mission Valley means San Diego could host some of the highest-profile sports events in the world.

“That’s an adrenaline shot that boosts what happens here — it raises the profile of the sports industry, creates construction jobs,” Lackritz said. “It opens us up to the Super Bowl, a Final Four series if the stadium has a dome and World Cup soccer even without a dome.”