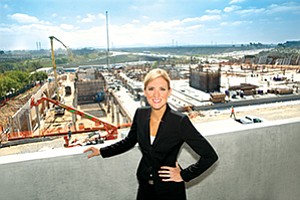 Tracy Murphy is the market lead for BioMed Realty’s i3 campus, which broke ground in UTC in February and is designed specifically for life science companies. Photo by Melissa Jacobs.

When BioMed Realty set out to build the i3 development in University Towne Center, its goal was to create a showpiece project to reflect the very best commercial space available for the growing life science industry.

“It is consistent with what you see and can expect from BioMed, in terms of our design style,”said Tracy Murphy, market lead for BioMed in San Diego. “We are experts in building strong relationships and understanding what our tenants need.

“Our real estate is specific to the life science industry. Our space consists of lab and office buildout. Within each of our buildings, about 60 percent is lab and 40 percent is office.”

Ground was broken in February on the 316,000-square-foot lab-and-office project, and completion is expected in mid-2016. Designers strove to give the development flexible work spaces to suit the changing needs of life science companies. In addition to a 16,000-square- foot amenities area, the campus will have three 100,000-square-foot customizable buildings with adaptable lab zones.

Murphy said theplan is to create an atmosphere of collaboration among tenants. Amenities that encourage interaction will include an open courtyard programmed with activities, a fitness center, a market and a cafe.

“It will be an iconic project that represents the strength and innovation of the San Diego life science community,” she said.

Kay Kornovich, a managing director at the Perkins + Will design and architecture firm, worked on the i3 project.

“The whole idea was to create a minicampus with a lovely large courtyard surrounded by three buildings,” she said. “By turning the buildings inward and having a courtyard and little surface parking, it will feel very campuslike.”

Founded in 2004, Rancho Bernardo-based BioMed develops and leases space in San Diego and other biomedical hubs in the U.S. and the United Kingdom. It has a strong presence in Seattle, Boston, the San Francisco Bay Area, New York and New Jersey.

Typically, drug companies and government research labs are the anchor tenants at BioMed facilities. Tenants in the San Diego region range from large companies such as Isis Pharmaceuticals to small startups.

“The fabric of what San Diego is, the brain trust, is very entrepreneurial,”Murphy said.“We are feeling really optimistic and excited about what the industry is doing. A lot of proven entrepreneurs are doing a lot of great things in our community.”

A big component of the i3 project is green, environmentally friendly design.

Other green features will include onsite biofiltration zones, the use of recycled water for irrigation and cooling towers, and fuel cell energy generation.

Succeeding in the life science commercial real estate market requires a keen understanding of what tenants need, said San Diego real estate economist Gary London of the London Group. It’s all about setting the stage for innovators to succeed.

Projects like i3 “create an early stage platform for people with ideas,” London said. “It creates an opportunity for them to work and evolve.”

BioMed estimates that life science real estate in the San Diego region is about 94 percent occupied, creating demand for new space so new companies can start operations and existing companies can expand.

With the 316,000 square feet at i3, BioMed will have 18.7 million rentable square feet worldwide, said James W. Cullinan, vice president of marketing and communications for BioMed. Eight development projects are underway. There is nearly two million square feet under construction in such places as Cambridge, the San Francisco Bay Area, New York, the United Kingdom, Seattle, and Winston-Salem, N.C.

Cullinan said the company foresees nothing but growth for the life sciences industry.

“The demand for a longer life and a healthier life is only increasing,” he said. “People are living longer. To do that, you need to not only treat symptoms of current illnesses and diseases but you want to cure those diseases. We don’t see that going away ever.

“We think San Diego is an incredible market. When people think of life science in San Diego, they will think of i3.”

Life science companies often locate near academic and research institutions. Murphy said San Diego County has a wealth of such institutions, such as the Salk Institute for Biological Studies, the Sanford Burnham Prebys Medical Discovery Institute, The Scripps Research Institute and University of

Life science has become a major driver of the local economy. According to a recent analysis of state Employment Development Department statistics by the National University System Institute for Policy Research, the biotech/pharmaceutical/biomed sector, which includes research and development as well as manufacturing, accounts for about 33,400 jobs in San Diego County.

“The average wage is now about $140,000 for biotech/pharmaceutical jobs,” said Kelly Cunningham, an economist for NUSIPR. “That is pretty impressive.”