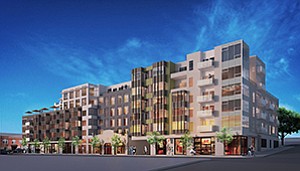 Among the latest proposed mixed-use projects in downtown San Diego is Kettner Lofts in Little Italy. Photo by CityMark Development

Downtown San Diego currently has about 2,000 apartments and condominiums in various stages of planning and construction, and two newly proposed mixed-use projects are slated to add another 386 to that total.

Locally based CityMark Development plans a six-story project in Little Italy that would include 130 dwelling units and 9,100 square feet of ground-floor retail; and an entity listed as XJD LLC is proposing a 21-story tower and an adjacent smaller building in Cortez Hill that would have 256 residential units and 11,910 square feet of retail, according to applications filed with Civic San Diego.

Both projects are scheduled to be reviewed this month by a design subcommittee of the city’s downtown project oversight agency.

CityMark Development Vice President Russ Haley said his company has done several projects downtown during the past decade, including the 121-unit Doma and 86-unit Aperture condo developments in Little Italy. The latest project, an apartment development called Kettner Lofts, is slated for a parcel on the east side of Kettner Boulevard, north of Hawthorn Street.

That northern portion of Little Italy has seen several openings of new apartments, restaurants and bars over the past two years, much of it targeted toward the younger millennial residents increasingly flocking to the city’s urban core neighborhoods.

“It’s just been a hot location recently — very hip, with lots of places to go and with a lot of energy,” said Haley. CityMark recently completed a residential development in Encinitas and has other urban-infill residential projects in the works in Lemon Grove, Imperial Beach and San Diego’s uptown neighborhoods.

“It doesn’t have to be in a downtown, but it’s generally in an urban core,” Haley said of the San Diego-based company’s recent projects in the region.

Once approvals are obtained, he said CityMark expects to begin construction on Kettner Lofts in January 2016, with the first move-ins to take place in summer 2018. Ground-floor retail tenants have not been finalized, but there will likely be a mix of stores and restaurants.

Area Stays True to Its Roots

First settled in the 1920s by the families of Italian immigrant tuna-fishermen, Little Italy continues to capitalize on its proximity to the downtown waterfront, access to mass transit, and a generally family-friendly mix of tourists and locals who regularly come together for festivals, farmer’s markets and other community events.

City leaders have noted that Little Italy — generally bounded by Laurel Street, A Street, Pacific Highway and Front Street — has seen about 3,000 new apartments and condos added over the past decade, and more are in the works.

Less than two miles from the Kettner project, in the adjacent neighborhood of Cortez Hill, the entity known as XJD LLC has proposed a project called 7th & A on the north side of A Street between Seventh and Eighth avenues.

Developers could not be reached at press time. According to the project application, plans call for a 21-story tower and a three- to five-story low-rise building, with 256 residential units, indoor and outdoor amenities, 11,910 square feet of street-level retail, and 347 parking spaces in four underground levels.