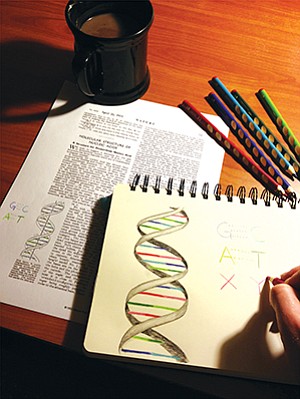 The phrase “synthetic biology” might sound like an oxymoron meant for science fiction novels, but it’s not for Synthorx Inc., a small biotechnology company in Torrey Pines. Synthorx is developing a new — and a little bit scary — way to create and protect life.

The field of synthetic biology is evolving so rapidly that even scientists working in it don’t agree on the definition. At its core, synthetic biology involves bringing engineering principles to biotechnology. It’s an approach meant, ultimately, to make it easier for scientists to design, test and build living parts and systems — even entire genomes.

Some even posit that with synthetic biology, the days of designer plants and animals are getting closer. San Diego’s serial entrepreneur and life sciences pioneer J. Craig Venter wrote in his book, “Life at the Speed of Light,” “Synthetic biology frees the design of life from the shackles of evolution.”

The intricacies of how scientists achieved and are building on this biotechnological breakthrough is difficult to put into words — even for CEO of Synthorx Court Turner. After several moments of silence as he tried to form ways to explain how this science will impact local business — as well as many global industries — he compared the tool of synthetic biology for drug development with the creation of new and faster computer chips for electronics.

“Remember when it cost $15,000 to buy a 60 inch plasma television? Now they’re $800 at Costco,” Turner said. “There’s clearly been a major change in the technology of electronics. This will have a similar effect for products produced by biology — cheaper, more available drugs, food and fuel.”

While many research institutions, universities and biotech companies are delving into the possibilities surrounding synthetic biology, the Avalon Ventures’ startup Synthorx has a tool in its back pocket that might make a greater impact — a new synthetic DNA-base pair.

Prepare for a high school biology refresher. According to Turner, many biotech companies are developing systems using the natural DNA base pairs, A-T and G-C. With these naturally occurring pairs, proteins can be built with 20 amino acids. Floyd Romesberg, a professor at The Scripps Research Institute, developed a third, synthetic base pair coined X-Y. With this addition to the genetic alphabet, proteins can be built with up to 172 amino acids.

“Floyd used to say, ‘If you have a question and you can only answer it with 20 words, how good would your answer be?’ ” Turner said. “What if you could answer the question with 172 words? When you only have A, T, G, C and 20 amino acids, there’s only so many options. Synthorx expands the diversity of those options.”

Synthorx has exclusive rights to this technology from The Scripps Research Institute and has received an undisclosed investment from Avalon Ventures and Correlation Ventures in order to put the science to work. The end goal? You name it. The tool has applications in every sector from agriculture and food to drugs and therapies.

“Synthetic biology’s most immediate commercial benefits will be in the biomanufacturing of therapeutic proteins and vaccines. And more broadly, it will affect many areas of chemical engineering, specifically in petrochemicals and plastics as well as environmental remediation, crop science and animal breeding. There are almost no limits to the promise of synthetic biology.”

Synthorx is beginning with ways to make drugs and vaccines in a cleaner and greener way, resulting in cheaper medicines.

As many entrepreneurs and investors will tell you, on average drug development costs $1 billion and 10 years to develop one successful product.

“It’s a very inefficient process. The drug manufacturing process is probably the same now is the same as it was 50 years ago,” Turner said. “Huge facilities with a lot of waste and transition metals being used.”

Right now, drugs are made through a very iterative process — a gene is targeted, a compound is made, tested, changed and tested again. It can be a very long process before a successful drug candidate is found. Nature, however, is already doing this kind of work within cells.

“If you can imagine, those reactions actually happen inside cells using proteins,” Turner said. “All it would need to work is water at room temperature. So all this stuff that people do in these hoods with safety equipment, cells can do without any of the equipment in a very efficient and high yield way. With synthetic biology, there’s a way to take all this inefficient, dirty, synthetic chemistry and convert it to a much friendlier biochemistry environment inside the cell.”

Turner said with synthetic biology, a cell can be designed to make millions of versions of a drug compound, all in one day, and then test it in parallel and let the cells determine which drug compound works. A trial and error drug development process that usually takes around 24 months could be determined within one month.

The company said its next milestone is to optimize its platform, enabling cells to produce the best versions of drugs, proteins and antibiotics.

“This would represent the most advanced milestone in synthetic biology,” Turner said. “Functional, semi-synthetic organisms producing products for the benefit of multiple industries.”