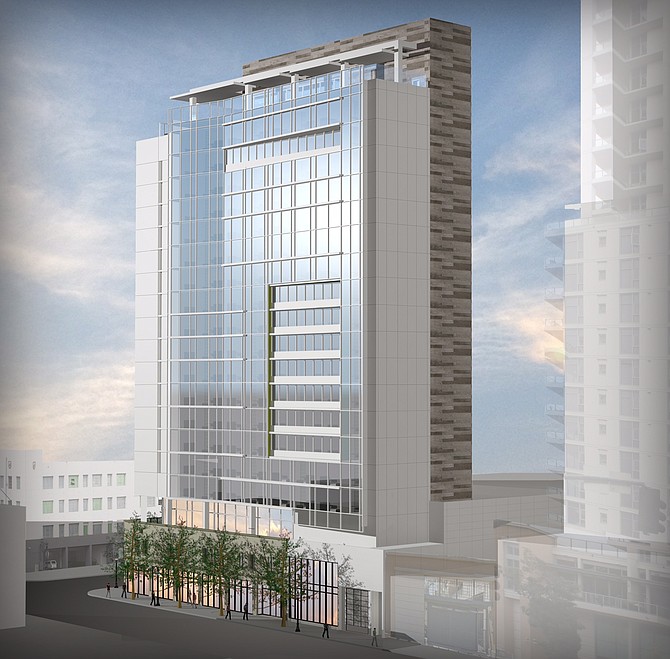 Virginia-based Hilton Worldwide has a large new tower-style hotel planned for East Village, as part of a national rollout of a new upscale brand called Canopy by Hilton.

A Hilton Worldwide spokeswoman said the upscale hotel is planned for the northwest corner of 7th and Island avenues, adjacent to the Gaslamp Quarter. The company has not released details including development costs or the number of rooms, but a rendering provided by Hilton shows a multiple-story structure.

In a statement, Hilton Worldwide officials said the company has 11 signed letters of intent with various operators to open its new Canopy by Hilton format in the U.S. and London, with properties expected to begin opening in 2015 following new-construction and renovation projects.

The company described Canopy as an “accessible lifestyle” format geared to business and leisure travelers. The hotels will be designed to reflect the culture of their urban neighborhoods, with basic Wi-Fi and artisanal breakfasts included in the price of room stays, along with a local “welcome gift.” Some locations will have evening tastings of local beer, wine or spirits.

Also, operators of the Hilton Bayfront have previously announced plans for a 500-room expansion, but that is contingent on the stalled expansion of the next-door San Diego Convention Center moving forward.

The planned new Hilton project is not far from Pendry San Diego, a $100 million, 317-room luxury hotel now under construction by The Robert Green Co. and Montage Hotels & Resorts. That project recently broke ground on a Gaslamp Quarter site bounded by Fifth, Sixth and Island Avenues and J Street.