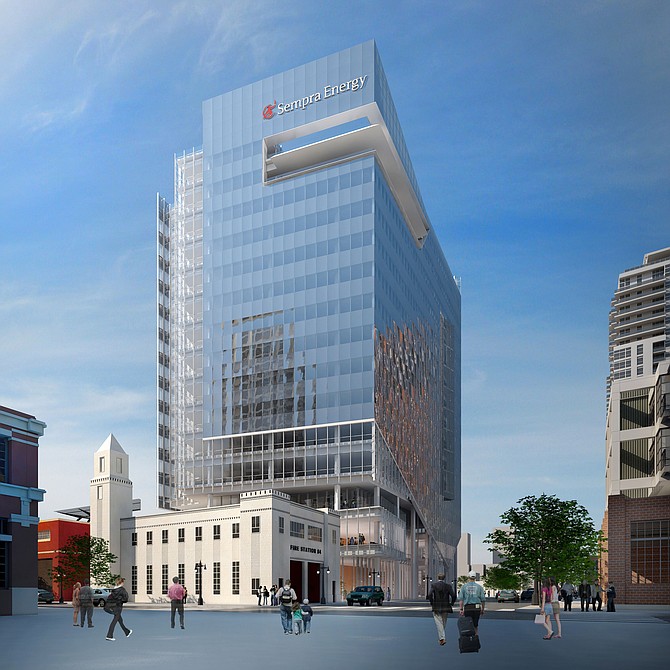 Officials said a public topping out ceremony, marking completion of the steel construction phase of the 16-story project, was scheduled for Oct. 15 at 8th Avenue and J Street.

Sempra Energy is slated to occupy by the full 300,000-square-foot tower being developed by Cisterra, as the the energy services provider relocates approximately 700 employees from the West Ash Street building that has been its downtown headquarters since 1968.

Work began in October 2013 on the East Village project, designed by architect Carrier Johnson + Culture and being built by Turner Construction Co. The building will include 330,000 square feet of office space, 500 parking spaces above and below ground, and green building features designed for LEED Gold certification.

Cisterra officials said the project also includes a 5,000-square-foot urban plaza on the northeast corner of the site that will have seating, landscaping and lighting. The project’s south plaza will include a water feature and green wall, and the southern façade has been angled to maximize views of the nearby Petco Park.

The office tower is being constructed around three historical buildings on the site, including Historic Fire Station #4.

Building owner Cisterra has not divulged the development cost for the East Village tower, which Sempra will occupy under a 25-year lease. Cisterra also developed the ballpark-adjacent DiamondView Tower, currently owned by Cruzan of San Diego.