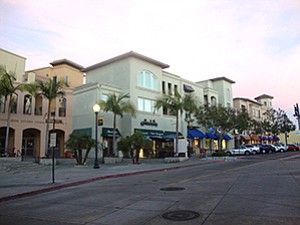 Regency Centers is at work on a $3 million renovation of The HUB Hillcrest Market, one of 10 retail centers that it owns in San Diego County and where vacancies are rare. Photo by Regency Centers

Growing payrolls and a steady influx of tourists have brought full recovery to San Diego County’s retail industry, though the region is still about a year away from pre-recession sales highs reached at stores and restaurants, according to a recent third-quarter report by the brokerage company Marcus & Millichap Inc.

That local demand has made San Diego among the nation’s most coveted metro markets for expansion by national and regional chains, but there’s only so much space available, due in part to still-sparse new construction in the desired locations. The local retail vacancy rate is expected to drop to 4.3 percent by year’s end.

Marcus & Millichap Vice President Bill Rose was among the 4,000 industry professionals who attended the annual Western Division Conference of the International Council of Shopping Centers, held recently at San Diego Convention Center. Among his take-away impressions was that San Diego — like other Western cities including Denver, Seattle and San Francisco — has demographically attractive pockets where retailers most want to be but can’t find space to set up shop.

“In the West you’re getting a sense that companies want to expand, but they’re also asking, do you have the real estate?” said Rose, who is based in the brokerage firm’s San Diego office and tracks national trends in retail property investment.

San Diego ranked as the nation’s 17th tightest retail market based on vacancy in a recent report by brokerage firm Cassidy Turley, and it has consistently been among the tightest major metro markets for the past decade.

Regency, which owns 10 San Diego County retail centers, is in the midst of a $3 million renovation of The HUB Hillcrest Market — with HUB standing for Hillcrest Uptown Block — which it purchased in 2012 for $81 million.

It has also invested significantly in a renovation and expansion at Balboa Mesa Shopping Center, in San Diego’s Clairemont neighborhood, which it purchased for $59.5 million in 2012. That center has several new tenants on the way, and recently saw the opening of the local region’s third location of San Francisco’s Boudin Bakery Café.

Regency Centers Senior Vice President Gregg Sadowsky said changes at both centers have been focused on making them self-contained properties with local identities, including several neighborhood-themed murals by local artists being installed at the Hillcrest property.

The aim at the Hillcrest center — anchored by Ralphs and Trader Joe’s and essentially fully leased up — is to provide a mix of merchandise and services geared to residents who want lots of amenities located near where they live, without having to drive around the city for their needs.

Florida-based Regency owns 328 centers nationwide, and its 10 San Diego County centers collectively are no more than 4 percent vacant. There are waiting lists of retailers looking to fill spaces that do become available in certain neighborhoods, which Sadowsky said reflects general sentiments he also heard at the recent shopping center conference.

“There’s a sense out there that the economy is improving and some of these retail companies are getting back to expansion mode nationally,” said Sadowsky, who is based in Regency’s Solana Beach regional office.

Experts noted, however, that demand varies greatly by geography, even within the same metro market, and many retailers are in the process of reducing rather than growing their real estate footprints, cutting back on new store openings.

Some are expanding by way of downsizing their store formats, in order to establish a presence in a larger number of locations in desired markets that don’t have space for new big-box stores. Target Corp. recently announced plans to open a new small-format Target Express in San Diego’s South Park neighborhood next year, and Wal-Mart Stores Inc. has already opened several San Diego County locations of its mini Walmart Neighborhood Market concept.

“We have somewhat of a luxury here, in that it’s a high-demand market for retailers and there are high barriers to entry,” said Steve Avoyer, president of San Diego-based property services firm Flocke & Avoyer Commercial Real Estate.

Flocke & Avoyer helped arrange the Target Express lease and currently oversees leasing at more than 100 shopping centers in San Diego County. The average vacancy rate at those centers is below 5 percent.

Avoyer said San Diego’s combination of continued high demand among national retail and restaurant chains, amid a scarcity of space in desired locations, has helped insulate the region from larger downsizing trends hitting the national retail industry. Those trends are partly the result of the growing popularity of online shopping, with impacts that include reducing the need to store and display items in a physical space.

Avoyer said comments he heard at the retail convention suggest a high degree of optimism among retail companies heading into the holiday season, but sentiments as always can change between Black Friday and Christmas Day.

He said observers will be watching in coming months for the impact of potential store closings by a few national chains with wobbly finances, and more immediately what might happen in overlapping service areas of the supermarket chains Albertsons and Safeway, parent of Vons, which recently merged and are expected to announce nationwide store closings by year’s end.

In San Diego, however, experts note that emptied store spaces during the past decade have not taken long to be refilled by expanding retailers. In some locations, Avoyer noted, an emptied supermarket space could be quickly filled by one or two retailers now scouting local expansion spots.