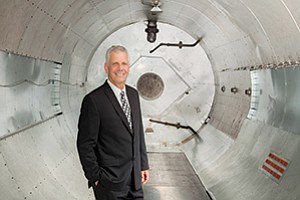 Few companies can trace revenue to a big rock hurtling through space the way that Malin Space Science Systems and Vanguard Space Technologies Inc. can.

That big rock is an asteroid called “Bennu,” which is 500 meters long — roughly the distance from Balboa Park’s California Tower to the fountain at the foot of El Prado — and is on course for an extremely remote chance of striking Earth in a few generations. Malin Space and Vanguard Space are involved in building and equipping an unmanned space probe that U.S. officials have decided to dispatch to study Bennu. Malin Space will provide three specialized cameras for the unmanned spacecraft, called Osiris-Rex and set for launch in 2016 carrying a high-gain antenna reflector from Vanguard.

Since it comes reasonably close to the Earth in its orbit, Bennu is a convenient destination, said Michael Ravine, advanced projects manager for Mira Mesa-based Malin Space.

The heavens may seem like the playing field of large corporations such as Boeing Co. (NYSE: BA) with $86.6 billion in 2013 revenue or Lockheed Martin Corp. (NYSE: LMT) with $45.4 billion — Jupiter-sized enterprises that can deliver vehicles that may one day take humanity to Mars. Yet several San Diego County companies with revenues of a few million have found niches for themselves in space work, often as subcontractors to bigger companies.

And projects associated with an obscure asteroid are not these enterprises’ only work. Far from it.

With two facilities near the runway of U.S. Marine Corps Air Station Miramar, Vanguard Space Technologies builds a variety of satellite pieces, including bus structures — the main body of a satellite — and antenna reflectors. Nearly 100 Vanguard reflectors have gone into space, and nine are in production now, with customers including Lockheed Martin and Northrop Grumman Corp. (NYSE: NOC).

Vanguard has about 100 employees and expects $30 million in revenue this year, which would make 2014 better than the previous two years, CEO Frank Belknap said. The privately held business made $8 million worth of investments to its shops over the last couple of years.

Aside from a few detours, Belknap has been in the space hardware industry since 1983. People stay in the industry because they like it, he said. He has also worked for two North County companies, Cobra Golf — now part of Puma AG — and General Atomics Aeronautical Systems Inc.

The common thread among all of the places where Belknap has worked is that they deal with composite materials, which are very strong and very light. At more than 2 meters in diameter, a double-shell satellite reflector that hangs in the lobby of Vanguard’s main office on Dowdy Drive weighs just 35 pounds.

Such materials must be tough to stand up to the noise and vibration of the ride to space, and they must be able to withstand the wild temperature fluctuations between sun and the shade. To simulate conditions in space, Vanguard’s test chambers can cycle its products between extremes of 300 and minus 300 degrees Fahrenheit.

Lockheed Martin is building the asteroid-bound Osiris-Rex spacecraft, scheduled for launch in 2016. Plans call for it to rendezvous with Bennu in 2018 and create maps of it over six months. Ultimately, mission planners want to grab a few ounces of surface material and return it to Earth by 2023. Jet Propulsion Laboratory reports that there is a 1-in-24,000 chance that Bennu will collide with Earth in September 2175. The odds shorten in 2185 and 2196, with a 1-in-16,000 chance and a 1-in-11,000 chance, respectively.

The mission to Bennu is intended to measure the Yarkovsky effect, which is the way that sunbeams heat and cool the asteroid, causing the big rock to deviate from the orbit scientists have calculated. Project managers said the probe “will be a pathfinder for future spacecraft that perform reconnaissance on any newly discovered threatening objects.”

In early May, Malin Space announced a $3 million deal to provide three cameras — including optics, associated electronics and software — for the Osiris-Rex probe. The agreement calls for the gear to be delivered to Lockheed Martin’s space unit mid-2015.

Two of the cameras will be redundant navigation tools. A third, called the StowCam, will let scientists see whether the robot successfully collected an asteroid sample and whether it’s properly stowed for a return trip to Earth.

Malin Space, a specialist in space imagery, has enjoyed growth in recent years, going from 30 employees in 2011 to 40 employees now. The private business — led by Michael Malin, the company’s president, chief scientist and chief investor — does not disclose revenue.

The business also has a service component, handling the imagery from its space cameras, including the four on the Curiosity rover that is traveling around the surface of Mars. A little more than two years from now, a Malin camera on another robotic craft is expected to arrive at its destination orbiting Jupiter, when it will begin beaming back photos.

Meanwhile, Malin Space has been negotiating with Virginia-based Orbital Sciences Corp. on a deal worth more than $2 million. It is also waiting for word on who gets to equip a Mars rover mission proposed for 2020.

A short distance away in Mira Mesa is another business growing on its strength in radiation-hardened electronics for satellites.

Privately held Space Micro Inc., with 65 employees and growing, is so confident in its prospects that it recently took out a five-year lease on 20,000 square feet in a building next to its current facility. The moving process has since started. The information technology people have done their work, cubicles are going in, and a radio-frequency engineering group is set to take occupancy in 30 to 60 days, said Paul Brammer, vice president of business development.

The business reported this spring that it had more than 30 satellite programs in its backlog. Space Micro does not publicly disclose revenue. Dave Strobel is CEO.

San Diego has other space system players, of course.

Carlsbad-based ViaSat Inc. operates its own telecommunications satellite and is building a second. The $1.35 billion operation sells satellite service to a variety of customers, as well as electronics used to communicate with satellites. Maxwell Technologies (Nasdaq: MXWL), a $194 million electronics firm, produces electronics for space, while Sierra Nevada Corp., a privately held Nevada company, has operated Poway’s SpaceDev business since acquiring it in 2008. The latter has produced hybrid rocket motors and associated components for SpaceShipTwo, the vehicle that billionaire Richard Branson plans to use in his Virgin Galactic space tourism business.

Composite Optics Inc., a San Diego aerospace supplier since 1976, was a small independent business for many years before it went under the corporate wing of Arlington, Virginia-based Alliant Techsystems Inc. (NYSE: ATK) in 2003. Since then, it has remained in San Diego. Alliant recommitted to the area in 2010 by erecting a 60,000-square-foot shop to build bus structures and other major satellite components about a mile from Vanguard’s facility.

Alliant’s local management declined to comment for this article, citing the company’s pending merger with Orbital Sciences (NYSE: ORB), a $1.37 billion company. The businesses said the transaction will be complete by the end of this year and will result in a business called Orbital ATK Inc. Alliant’s pre-merger revenue was $4.78 billion, although that includes a pursuit that is distinctly different from aerospace — ammunition manufacturing. It plans to spin that $1.86 billion business off to shareholders.

Pros of Being Small

Belknap said Vanguard offers more than manufacturing. He sees Vanguard as a service provider, offering expertise such as engineering support.

Being small can have advantages. Vanguard has been able to tap into NASA’s Small Business Innovative Research grant program, under which the government pays for research and development. The business won $4 million of such grants this year, Belknap said.

Other pluses of Vanguard’s size include having a great vantage point for seeing how the big prime contractors operate. Even when taking criticism from big primes, Belknap sees an upside in that there are lessons to be learned, he said, adding that he feels the primes are on his side.

“They want you to succeed.”