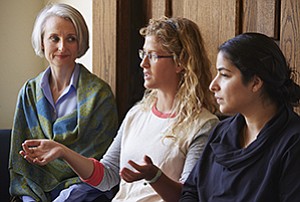 Carli Johnston, middle, a recent nursing graduate from the University of San Diego, is hopeful that her externships will help her find work in a competitive job market. Photo by Stephen Whalen.

Michelle Lee left medical school to pursue her passion for nursing, preferring the more intimate contact nurses tend to have with patients over the “in-and-out” bedside manner she sees as typical of many physicians.

Now, as the freshly minted registered nurse with a master’s degree from the University of San Diego enters the health care workforce, that passion is being met by concern. Like other new nurses in the class of 2014, Lee is anxious that the tens of thousands spent on her advanced nursing degree, plus a few thousand more for specialized training outside her USD curriculum, may not be enough to get hired — despite an ongoing and well-documented shortage of nurses. About half the new graduates have

Lee and several members of her graduating class, along with USD Assistant Nursing Professor Kathy Marsh, recently shared their outlook for the future of their profession, one that is marked by a distinct workforce paradox.

With the U.S. facing a very real nursing shortage, California is ranked 46th in the nation for nurses per capita, with 743 for every 100,000, according to the government’s National Center for Health Workforce Analysis; of California’s 58 counties, 28 report nursing shortages. And the state has designated San Diego County a registered nurse shortage area, with an estimated registered nurse workforce of about 28,540.

Meanwhile, registered nursing is listed among the nation’s top occupations in terms of job growth. The workforce is projected to grow 19 percent, from 2.71 million in 2012 to 3.24 million in 2022, according to the Bureau of Labor Statistics.

Yet many new nursing graduates like Lee are finding it difficult to land jobs, particularly in metropolitan regions like San Diego.

“There are still very few vacancies for nurses, particularly those who are just graduating,” said Steven Escoboza, president and CEO of the Hospital Association of San Diego and Imperial Counties. “This is happening across the state and across the country, and without a doubt in our San Diego hospitals.”

Scripps Health has two week-long hiring periods per year for new graduates, during which it is flooded with applicants from around the country. The regional health system, which employs about 4,000 nurses, closes out each hiring week with 2,000 to 3,000 applications from new nursing graduates, said Veronica Zaman, corporate vice president of human resources and learning at Scripps Health.

For the past few years, it has hired 150 to 180 new graduates, but it expects to hire about half that many this year. That means that if Scripps receives 5,000 applications this year, only about 3 percent of new grads will receive job offers.

“There are far more new graduates than we can even begin to hire,” Zaman said.

Sharp HealthCare applicants face similar odds. For its most recent recruitment cycle, which took place in February, it received about 1,100 applications and will offer jobs to about 30 or 40 new nursing grads, said Michael Peterson, director of recruiting at Sharp.

Of the factors at play, two loom large: the economy and the promise of the health care industry — attracting even more students than nursing programs and employers have room for.

The recession placed a stranglehold on turnover in the nursing job market as older, well-paid professionals delayed retirement in trying economic times. While experienced nurses can easily find employment, new graduates continue to struggle to get their foot in the door to gain the experience they need.

Lee stands unique among many new graduates in that she wants to specialize in obstetric nursing — a field typically filled with more experienced nurses. She has sought additional training in that area on her own dime.

“I’m putting up another $3,000 out of my own pocket just to make myself competitive in hopes to get hired,” Lee said.

Another reason the nursing job market is so competitive is that many Americans are making midcareer shifts into the field, Peterson said. This is the case with recent USD graduates Anthony Rodelo, Amy Owenby and Terri Phan: Rodelo spent 12 years in the U.S. Marine Corps, Owenby worked in event planning and public relations, and Phan was a volunteer in the Peace Corps, teaching health education in Moldova.

“These days, we have a lot of folks opting into nursing as a second career,” Peterson said. “It’s becoming a common trend that really intensified over the last four or five years. People are looking for job stability — and health care continues to be one of the fastest-growing professions.”

Indeed, during the recession, the health care industry was widely viewed as one that provided job security. Nurses of retirement age — many of the “sandwich generation” that had adult children moving home and aging parents to care for — held fast to their jobs. A University of California, San Francisco study found that the employment rate for nurses 60 to 64 grew from 75.5 percent in 2008 to 81.4 percent in 2010, though it dropped incrementally in 2012 to 79.3 percent.

At the same time, some worry that things could change quickly and create greater shortages.

“Many hospitals in the San Diego area are expecting a large portion of their workforce to retire if the economy continues to improve,” USD’s Marsh said. “If you’re looking at 25 percent retiring, we’re going to be in big trouble in San Diego with the nursing shortage.”

Sweeping change stemming from the Affordable Care Act have led to a growing emphasis on wellness and keeping people out of the hospital — changing the hiring dynamic for nurses. More jobs are available in home health care and fewer in acute inpatient settings.

It’s also worth noting that some areas have greater needs than others. Southern California’s Inland Empire is particularly in need of nurses, as well as states like Florida, Alabama and Texas, and they provide a better job market than San Diego.

“I always tell my graduating students that if they want to get a job as an RN, they can,” said Debbie Berg, associate dean and director of nursing education at San Diego City College. “It just might not be the job they want right off the bat.”

Not All Nurses Are Created Equal

San Diego has nine schools offering RN degrees — four community college, four baccalaureate and one master’s program, graduating about 400 new nurses each year in the region. Each confers the same certification, but the marketability of each degree varies widely.

“There’s no shortage of nursing jobs for highly educated nurses,” Marsh said. “And RNs with master’s degrees are in a better position than RNs with associate’s degrees.”

A 2010 report from the Institute of Medicine, a subsidiary of the National Academy of Sciences, sent waves through the nursing community by declaring that nurses with bachelor’s degrees or higher provided higher quality patient care. The institute then launched an initiative to increase the number of nurses with bachelor’s degrees from 50 percent to 80 percent by 2020.

This changing focus on the educational qualifications of RNs has had a ripple effect on the hiring practices. Many hospitals are now more likely to hire nurses with bachelor’s degrees or higher. Furthermore, many hospitals encourage their nurses to pursue higher education. Scripps, for example, has scholarship and tuition reimbursement programs to help employees pursue more advanced degrees.

“We do bring on nurses with both associate and bachelor’s degrees, but we try to focus on helping our employees move into a BSN type of role,” Zaman said.

The discrepancy in hiring practices when it comes to associate versus bachelor’s degree holders has led to a contentious debate between state community colleges and the California State Universities. Community colleges are lobbying the government to allow them to expand their associate’s programs into baccalaureate programs, and the CSUs are fighting back vehemently.

A state senate bill spearheaded by Marty Block, D-San Diego, is under review to begin a pilot program of up to 15 California community colleges that will offer four-year degrees in 2015. Berg of San Diego City College is a vocal proponent of allowing community colleges to provide bachelor’s degrees, but she thinks the likelihood of that happening in nursing is rather low.

“We want to start offering a baccalaureate program in nursing, but is there a prayer? No,” Berg said.

Community college nursing students have an even harder struggle to land the more competitive jobs, and Berg said she encourages each of her graduating students to pursue a bachelor’s degree at another school.

These baccalaureate nursing programs are extremely competitive, however. For the upcoming fall semester at San Diego State University, for example, nearly 3,000 students applied to the nursing program. SDSU offered slots to about 380 applicants, knowing that it was looking for a class of 120.

Part of the problem, SDSU School of Nursing Director Philip Greiner said, is that it’s hard to lure faculty to teach nursing — particularly on a higher level, which is where many of the jobs are most needed.