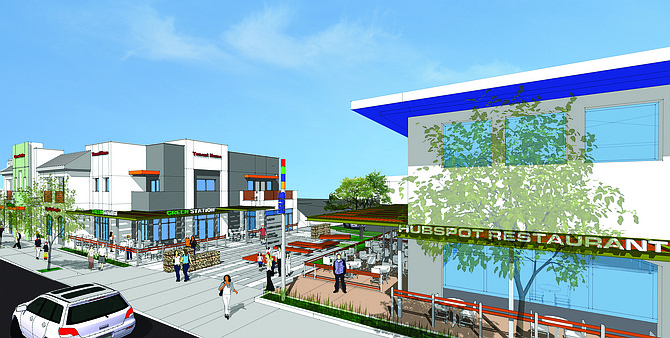 Florida-based Regency Centers Corp. has begun a $3 million renovation of the Uptown District Shopping Center in Hillcrest, which it purchased in late 2012.

Company officials said the makeover, designed by a team that included the late local architect Graham Downes, is set for completion in the fall. Regency is renaming the center The Hub – Hillcrest Market, with HUB standing for Hillcrest Uptown Block.

The approximately 148,000-square-foot center, which includes 10 buildings at 940-1050 University Ave., was built in 1989 and acquired by Regency for just over $81 million. The center’s tenants include Ralphs, Trader Joe’s, Wells Fargo and Starbucks.

Regency officials said the renovation will include new custom murals by San Diego-based artists that reflect the neighborhood, and several new tenants such as Napizza and Ritual Juicebox. Operators are also installing drought-resistant and indigenous landscaping, new way-finding signs, and sculptural art installations by Chris Puzio and Terry Dixon.

Bycor Construction is the general contractor, with others on the design team also based in the San Diego region, officials said.

Regency Centers (NYSE: REG), is headquartered in Jacksonville, Fla., and has a regional office in Solana Beach. As of April, the company owned 332 shopping centers spanning 43.9 million square feet, including several properties in San Diego County.