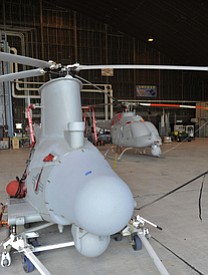 Northrop Grumman Corp. announced May 5 that the larger model of its Fire Scout drone will operate from ships this spring — and that its U.S. Navy customer plans to use the unmanned surveillance helicopter in actual operations in 2015.

The next step for the project is electromagnetic interference testing. Northrop Grumman (NYSE: NOC), which runs all of its unmanned aircraft projects from its Rancho Bernardo offices, said that it has installed special shielding called Faraday cages to protect sensitive equipment on the Fire Scout from signal interference. Northrop is spreading its Fire Scout dollars around, having a company in Kentucky build its Faraday cages. Final assembly on the aircraft is in Moss Point, Miss.

The larger model of the Fire Scout — based on a Bell model 407 helicopter airframe — can fly almost twice as long and can carry a sensor package three times heavier than the earlier, smaller model of Fire Scout. The earlier model, called the MQ-8B, is based on a Schweizer helicopter, now built by Sikorsky.